Silverton - one of my favorite places

While Creede is definitely my favorite little Colorado town, Silverton is high on my list of favorite places to go.  It stems from my college days - every year I'd take a minimum course load at Texas Tech, and work as many hours as I could at Furr's Supermarket in order to a) pay for the previous summer's gas, and b) pay for the coming summer's food and expenses. (I'd used gas credit cards.)  As soon as final exams were over in May I'd hit the road for Colorado, and several summers I took the train out of Durango or Silverton and head for the Weminuche Wilderness.  There was one summer I'd planned to hike the Continental Divide Trail from Monarch Pass to Wolf Creek Pass, and had a resupply cached upriver from Silverton.  [Dad started that hike with me, but both of us were turned back due to heavy snow in the Cochetopa Hills - and we learned that it was even worse at the higher elevations.]  But we still ended up in Silverton anyway, since I had to go back and get the cache and the food and cash in it.

The last time we were in Silverton was in 1991 - Don, the kids, and I were camped on the West Dolores, with train reservations. Dad was supposed to meet us at our campground the next evening, but he surprised us by meeting us in Silverton. That visit, and that town, still hold special memories for us. 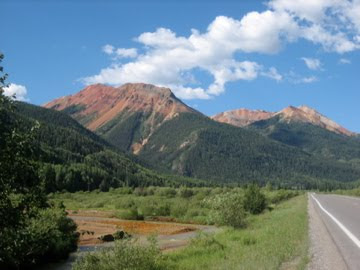 The drive south out of Ouray takes you up into a deep canyon first - the beginning of the Bear Creek National Scenic Trail and the Alpine Loop are there.  You come out into a wide valley, with a view to the south of the four Red Mountains.  They were heavily mined in the late 1800s - there were SIX towns strung along this valley  ending with the town of Red Mountain at the top of the pass. 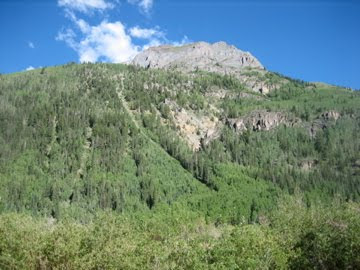 Some more mountain scenery along the way. 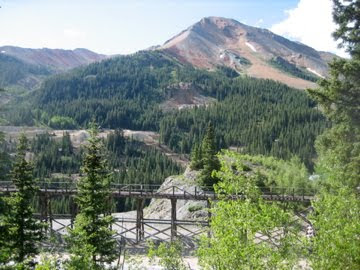 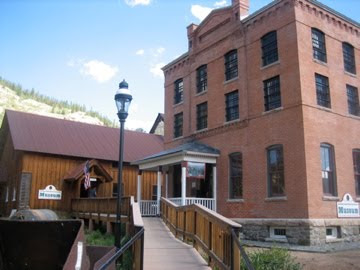 When we arrived in Silverton, our first stop was the Museum.  It's been greatly expanded since they were given the old jail building, and it has a exhibits on mining and local history. 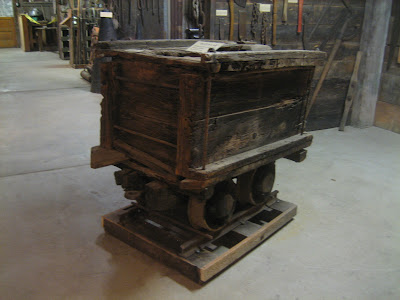 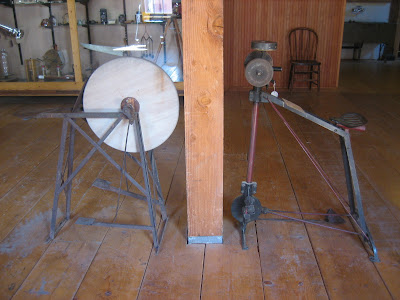 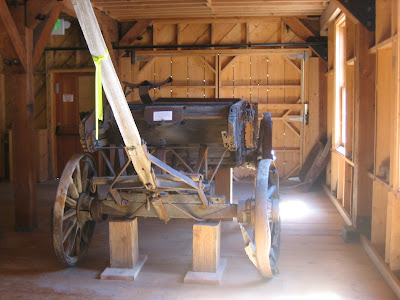 Old wagon for hauling supplies
We strolled up and down the main street of Silverton for a while, and stopped for lunch at Handlebars - the same place we'd had lunch with Dad back in 1991. 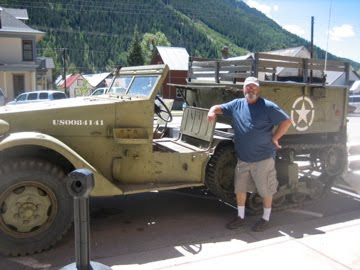 Don was intrigued by this old halftrack sitting in front of the VFW Hall. 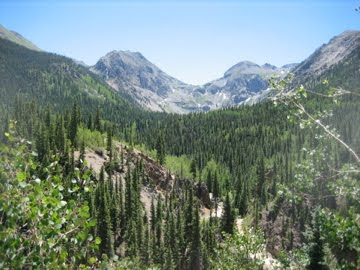 This is Arrastra Gulch, which was heavily mined for many years. The Silver Lake Mine is up in the center, and there's an aerial tramway from the top of the gulch down to the stamp mill in the Animas valley.  Not only did the tramway move buckets of ore, but miners rode in the buckets - sort of like we ride ski lifts today. 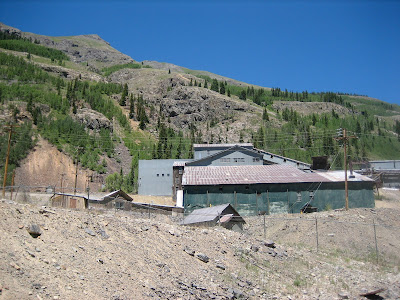 This is the stamp mill - currently undergoing renovation to be turned into a money-making enterprise giving tours to tourists.
A few more hours in Silverton and we headed back north towards Ridgway.  Along the way we stopped for about an hour at Crystal Lake, where Don unsuccessfully fished for some of the many trout we saw in the water. 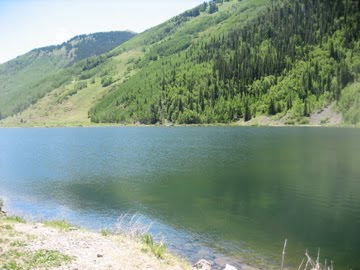 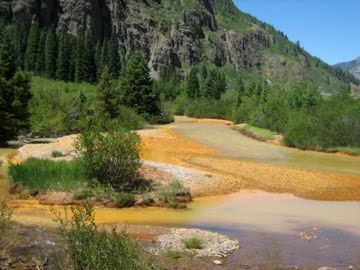 This is typical of many streams in the Red Mountain area - the red colorization from the mine tailings.
We continued on our way, getting back to Ridgway in time to eat a cold dinner of cereal (what I love to eat when it's hot outsides) and for Don to go fishing on the Uncompahgre.  He fishes that river every evening - there's a two-mile stretch through the park below the dam that is full of trout. It's artificial flies/lures only, catch-and-release, so the trout population remains stable with lots of big ones.
Posted by Cyndi at 8:42 AM