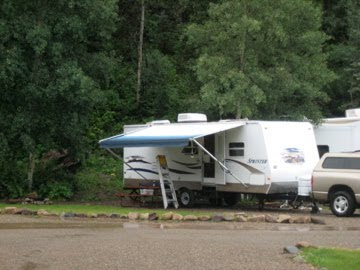 Site #92 at Priest Gulch Campground.  It's not ON the Dolores River, but about 50 feet away from it.
There's a row of sites right on the river.
Friday morning we enjoyed a last cup of coffee and breakfast at Ridgway State Park, and then leisurely packed up and left for Priest Gulch.  It's only 72 miles, so we didn't have to hurry at all.  The route took us up and over the Dallas Divide (the high country just north of the Sneffels Range), down to Placerville on the San Miguel River, then past Telluride, up and over Lizard Head Pass, and down to Rico. It's then 11 more miles to Priest Gulch Campground.

We stopped in Rico for lunch - there used to be a cafe/grill next to an old theater, and many years ago they made wonderful hamburgers.  It's now closed; another grill a few doors down didn't open until noon (it was 11 am). We looked across the street, and noticed the Mine Shaft Inn, which had a coffee shop/tiny restaurant in front - it had a big sign in the window that said "FOOD."  What a pleasant surprise this place was. Think of bed and breakfast without the breakfast.  There are tables for 3-4 in the front room, then down the hall past one of the bedrooms is a kitchen with tables for 6 more people. We were greeted by the very friendly proprietor, who made us fresh coffee in a French press. It was soooo good.  The food was limited:  tamales, quiches, or burritos.  It comes from the Hi Desert Bakery in Dolores, and is organic.  Don had a beef enchilada quiche, and I had a broccoli quiche that had black olives and chilies in it. The couple who came in right after us had one of the tamales and one of the burritos, and we noticed they both were substantial in size.

After we came out of the inn, we noticed the darkening skies - and realized we'd better get on to Priest Gulch so we wouldn't have to set up in the rain.  We made it just in time!  We pulled into our site, got unhitched and leveled, and had just enough time to plug in the electricity and pull out the awning before the rain began.  We experienced the biggest thunderstorm of the summer so far - huge, loud crashes of lightning and thunder and a driving rain that forced us inside since it was coming under the awning. The storm lasted about an hour - the roads of the campground turned into rivers and most of us had little lakes under our rigs.  After it was all over our neighbor across the street motioned us over to come look at the river. 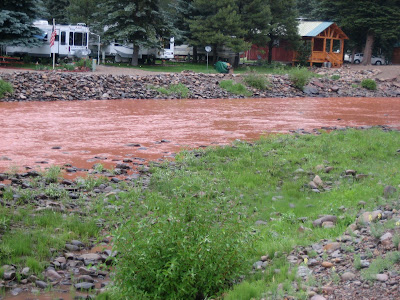 This area of southwest Colorado is on the southeastern edge of the Colorado Plateau - which as many of you know, has lots of red sandstone. The Dolores River runs through several miles' worth of those red sandstones between Rico and Priest Gulch - and when the area gets heavy rains like it did Friday, the river runs RED. It has cleared now, and Don has had two successful trips upstream to do some fishing. There are many small feeder creeks, too - and we'll take a couple days to give them a try. 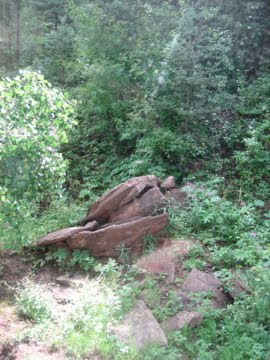 This is the very pretty view out our back window. There's a large patch of purple flowers (which are not Columbines but very similar).
We're going to be here until the 3rd of August - which is the day we head for home. Tomorrow we're going to go visit some Indian ruins - Hovenweep and Canyons of the Ancients National Monuments are southwest of here, with access to some of them by passenger car.

I'd like to welcome two more followers to Wanderlust - Amanda of Amanda's Veranda,  and Rod and Loyce  of Retired Rod.  Thanks for being interested in my writings!
Posted by Cyndi at 10:44 AM

Looks like you got a very good spot!! Boy that water is red---I know you are not looking forward to the end of your trip...but by the looks of the blog entries you guys have had a ball!!

Wow that thunderstorm looks like it might wash the camp away! A fisherman and a gal interested in quilting, of course were interested in your writings especially when you are in Colorado. We are in hopes of coming that way next week!