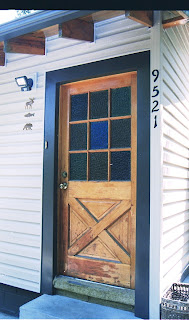 Such a welcome sight - our front door.  I am so exhausted - I think I got about 3 hours sleep last night.  We had left East Bay RV Park in Springville, Utah, intending to stop at the Cedar City KOA. We had reservations for tonight at South Point Casino & Hotel in Las Vegas. We arrived in Cedar City at noon, and Don wanted to continue. (He'd done that many times during the trip). So we went another 90 miles to Mesquite, Nevada, where we checked into the Virgin River Casino. There was no way we were going to stay in the RV--it was 111˚.  Our room was only $25, so it was a pretty good deal to get off the road and be in an air-conditioned room. That was the only positive.  We went over to their restaurant, and had a lousy dinner. My fried shrimp was freezer-burned and dry, and Don's fried chicken was overcooked and his fries were limp and stale from being under a heat lamp for a long time. We then discovered that the beds were hard as boards. I would lie on one side for 5-10 minutes until my shoulder hurt, then turn to the other side. I tossed and turned this way until midnight, when Don got up and decided we would drive home. He wanted to avoid the desert heat by driving at night. When we left Mesquite at 12:15, it was 95˚.  Luckily it cooled down by the time we reached Las Vegas, and we were able to turn the air conditioner in the truck off the rest of the way home. We reached Redlands at 6 am, where it was a cool 65˚. We dropped the trailer off at the storage unit, unloaded the cold/frozen food and the dirty clothes, and grabbed a quick Egg McMuffin and coffee at McDonald's. We were home by 7 am.  So nice. I put the food away, and Don emptied the truck, and then he went to bed and slept until noon. I haven't been able to sleep. I bet tonight I'll snore like a freight train!


I haven't posted since Dawson Creek - so here's what happened from there:

Saturday: Burning Embers Campground and Resort in Edmonton, Alberta.  292 sites.  All full due to the holiday weekend and a bluegrass festival about 5 miles away. We lucked into a site after someone cancelled it because it was muddy. We were actually given a wooden pallet to use to walk on between the truck and the trailer door since it was so muddy. The drive from Dawson Creek was fine - the roads were in great condition and flat.

Sunday: Riverside Resort in Lethbridge, Alberta.  Huge campground, which was at about 99% capacity since it was a holiday weekend in Alberta. It's also WAY overpriced.  We paid $54 Canadian, which turned out to be over $58 US.  We were in a section called "Arizona," which is called that because it's all gravel and no grass.  There is a swimming pool, but it had dozens of people (mostly children)  in it due to the holiday weekend.  One good thing about this night was that we met Jim and Joanne in the next site and had several hours of friendly conversation. They're full-timers who spend summers in Alberta and winters in Yuma, AZ.

Monday: Countryside RV Park in Dillon, Montana.  Very nice place.  We pulled in to a nice pull-through site just in time to get set up before a major wind and thunderstorm hit.  This is a pretty park, and if we go that way again we will stay there again. The owner/manager is a very nice woman, who really wants to give you information about the area. The shower and bathroom facilities are spotless.

Tuesday:  East Bay RV Park in Springville, Utah.  This is the second time we've been there. I recommend it as a place to stop along I-15. You are given a long pull-through site with full hookups. There's a pool and some very nice shower/toilet rooms. The park is nicely kept, and they only charge $28.  That's a little more than HALF what we paid for a not-as-nice place in Lethbridge.

We learned from our daughter that while we were gone a wood rat got into the house - and then drowned itself in our toilet. She was up here to do her laundry and water our plants, and discovered it in the toilet. Gross!  Luckily it didn't clog up the toilet when she flushed it away. We'll now keep our eyes and ears open for signs of more. We can't figure out how it got in. I haven't seen any signs in the kitchen or anywhere else.

This will be my last post on Wanderlust for a while - I'll be back on my other two blogs, Cookin' With Cyndi and Just One More Stitch, until we take the trailer out again.
Posted by Cyndi at 4:24 PM No comments: