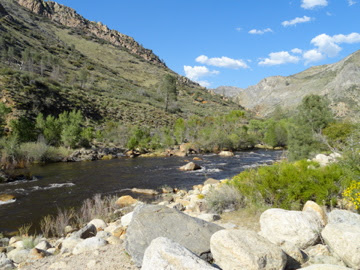 * Our site is about 40 yards from the river. I can hear it but not see it. Just a quick walk to the edge for the above picture.
* No cell phone reception up here in the canyon.
* I found a classic rock radio station out of Fresno.  Nice!
* It was pretty hot when we got here--85 degrees. We put the awning out and opened up all the windows in the trailer. It was too hot to be in the trailer, so while Don fished all afternoon, I sat in the shade and read. It didn't cool down until the sun went behind the mountains around 6:30.

* Don didn't catch any fish today.
* I put out my six solar lights to charge when we got here. Then when I was moving them, I broke one. Already. But the 5 remaining ones are very pretty in the dark--they change colors. The people in the next site over have a string of them (like Christmas tree lights), which they've wrapped around and draped over a large bush.

Saturday April 21
* We left the awning out during the night, and around midnight the wind picked up a little and kept jerking it around. Don went out a few hours later to put it up, and walked into a rock. Three of his toes are scraped and bruised.
* The brand-new toilet started leaking this morning. We now have to walk over to the campground toilet like we used to when we were tent camping.  I'm going to have to limit my after-dinner fluid intake!
* While there are 4 sites to the north of us with people in them, there's no one in any of the sites along the river to the south of us. You would think they'd fill up on the weekend.
* I hate being hot.  At 2:00 pm, it's 88.  We have no air conditioning since we have no hookups.
* We took a short drive up the river, passing the Fairview Dam and the parking lot that serves as a staging area for rafters and kayakers. The parking lot was full--over 50 cars. We continued up the highway to the former logging town of Johnsondale, which is now a privately-owned or membership "resort" called R R Ranch. We saw dozens and dozens of mostly unoccupied RVs and a sign for a general store - "Open to the Public - Inquire at Security Gate."


* The road over the mountains to the Central Valley is closed just past Johnsondale.


* Did I say I hate being hot?  Right now I'm sitting underneath a tree by the side of the highway while Don is fishing a stretch of the river above our campground. There's a breeze, which helps, and I'm sure it's cooler here than under the awning at the trailer.

* It was cooler last night than the first night--I hope that means it'll be cooler today.
* Almost everyone in the campground packed up and left.


* Noon: Nope, it's gonna be a hot one again. Already 90. Don came back from fishing--no luck again--and thankfully said we could go home tomorrow.  Now we just have to sit through one more hot afternoon.
*My version of what the idiot who showed up 2 sites over said to his girlfriend this morning:
"Hey darlin', let's get out of Bakersfield for the afternoon. Let's take a ride up the river above Kernville, and find a nice empty, quiet campground to bother. We'll pull into a campsite--heck, we don't need to pay anything, we'll just be there till it's dark--open up the truck doors and crank the radio up as loud as we can. Then we'll sit out in the blazin' hot sun and drink beer all afternoon. I'll sit in my chair in the bed of the pickup, and you can set your chair on the ground in back of the truck. Every once in a while we'll go over to the recyclin' bin and try to make our bottles break as we throw 'em in there. How's that sound?"
Sure enough, that's what they did. They finally left around 7:00. It's finally peaceful here. And with the sun behind the mountain, it's started to cool off.

We'll head home tomorrow, where I know it's cooler than this, and Don can go fish the Santa Ana River, Big Bear Lake, and Jenks Lake.  He might even be cold out there.


Monday April 23
* We were up with the first light, had a cup of coffee and a couple of small Hostess donuts. Broke everything down and were on the road by 7 am.
* Stopped for breakfast at Bernardino's Restaurant in Inyokern - a Mexican food restaurant that serves some pretty nice breakfast. Don had the Huevos Mexicana - scrambled eggs with jalapeños, onions, tomatoes, and cheese. He opted for hash browns instead of the beans and rice. I had their Huevos Rancheros - a tortilla, refried beans, 2 eggs, cheese, and a pretty good ranchero sauce that had chunks of bell peppers and onions in it. I also had the potatoes. 2 cups of coffee each and we were good to go - and knew we wouldn't have to stop for lunch.
* We drove down Cajon Pass into a thick fog blanketing the whole San Bernardino valley. There were even patches of drizzle. I LOVED IT after being so hot for 3 days.
* Dropped the trailer and unloaded it around noon; stopped at the grocery store, and drove up the canyon towards home. Right around the post office in town, we left the fog behind and were in clear, sunny skies and COOL temps. It was about 65 - so much better!  It's good to be home!
Posted by Cyndi at 6:25 PM 2 comments:

We're leaving in the morning and going to the upper Kern River in the southern Sierras. We have reservations at a nice Forest Service campground called Fairview. Our site is right in the river, so we'll be serenaded to sleep at night by the sound of the water. No hookups, and no cell phone reception, so we'll truly be "off the grid" for 5 days. Don will fish, and I will read and cross stitch. I'll take pics and post about the trip when we get back!


- Posted using BlogPress from my iPad