Our last day in Colorado

...was spent driving from Lake City to Towaoc (south of Cortez). We got up before sunrise, ate some pastries and hard-boiled eggs with our coffee, and got the trailer ready to hit the road.

As we were hooking everything up, I had to take two more pictures - I just love the yellows. 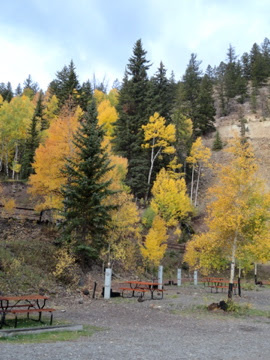 The campground is slowly emptying out. These are the four sites next to us. All those trees were green until last week. 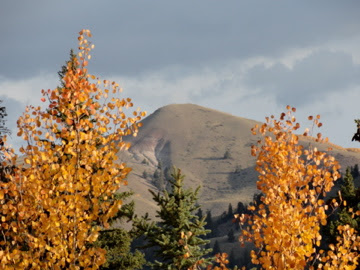 This was our view from the site to the mountain that overlooks Lake City. The sun was just coming up and lit it up. 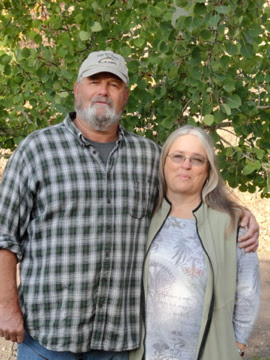 When you leave the Highlander, Don and Dianne take a picture of you for their wall.  The laundry room has collages of photos of everyone who's stayed there the past few years.  I had Dianne use my camera for one of us, too.

We were able to hit the road about 8, and drove north in pretty nice weather to the 50 near Gunnison. From there we went west to Montrose and south to Ridgway. As we neared Montrose, we went underneath the front edge of a cold front, and battled a little wind.

At Ridgway, we turned west and headed up the Dallas Divide, and right into a big thunderstorm. After about 10 miles it began to hail, and when we cleared the hail, we saw that it had really dumped a lot of it. It looked like snow there was so much of it.

We made it down the other side to Telluride, and then headed up and over Lizard Head Pass. Around 1:30 we stopped for lunch at Herk's in Rico - our favorite place, the Enterprise Bar & Grill, was closed.  But the burgers at Herk's were good, too.

Around 3:30 we pulled into the RV park at the Ute Mountain Casino in Towaoc.  The RV park out back is really nice - it has full hookup sites for $30 and water/electric sites for about $20.  Our site had a great view to the west of Sleeping Ute Mountain. 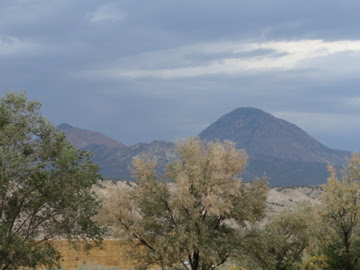 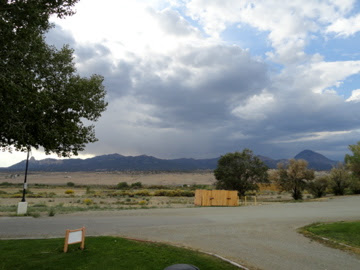 Don went over to the casino with a $20 bill - and returned in about 15 minutes.  I think he lost that $20 faster than he's ever lost in Vegas or Laughlin.   After a dinner of cereal (we'd eaten so late in Rico), we enjoyed a little television before going to bed for our last night in Colorado.
[The next day we went to Seligman, Arizona, and were home by the following day.]