I missed the creation of this monument.  It was created 10 years ago, and takes up most of the southwest corner of Colorado (west and northwest of Cortez). For many, many years, only little Hovenweep National Monument existed, with several ancient sites to visit in Utah and Colorado.  But this new monument, administered by the Bureau of Land Management (Hovenweep falls under the National Park Service), has over 6,000 documented sites, and the experts are sure there are many more.

I recommend that you start your visit at the Anasazi Heritage Center, a relatively new museum and visitor center built on the hillside above Dolores and McPhee Reservoir. 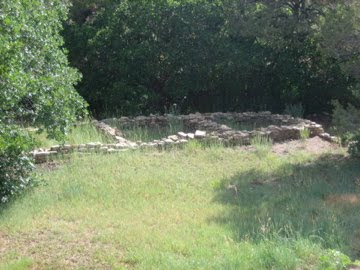 This is the Dominguez Pueblo (named for Father Dominguez of the Dominguez-Escalante Expedition of 1776). It's right in front of the Anasazi Heritage Center. Built around 1123 A.D., it had three rooms and a kiva and housed a family of 3-4.
We spent over an hour in the museum - it is full of artifacts from the local area, especially all the settlements that were excavated before they were covered up by the creation of McPhee Reservoir, along with numerous other exhibits.  We were impressed by how nice this museum and visitor center was.
Before we left the museum, we hiked up to the top of the hill behind it to the Escalante Pueblo (I bet you can guess who that's named for...). It's a half mile hike with only 100 feet of elevation gain on a paved path. 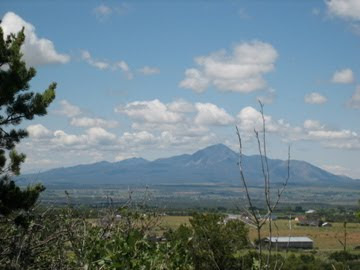 About halfway up the hill you get a good view of Sleeping Ute Mountain southwest of Cortez.  The highest peak is his folded arms, and you can see his feathered headdress spread out to the right. There are a couple of small volcanic dikes at the southern (left) end, which represent his feet. 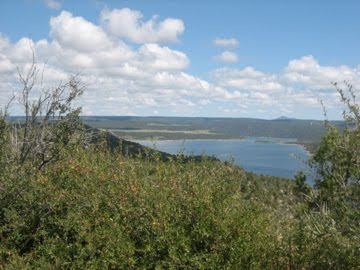 Also at the top, you have a nice view of McPhee Reservoir. 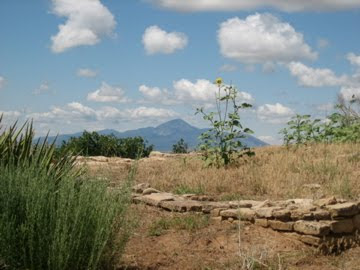 One edge of the Escalante Pueblo, at the top of the hill. 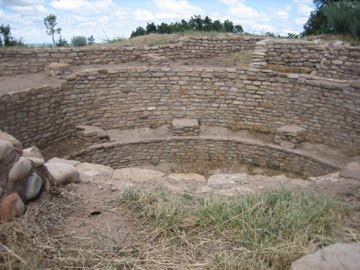 A kiva  is a subterranean room usually used for ceremonial purposes.
From there, our next stop was Lowry Pueblo. It's a short drive up the 491 (which I remember as the 666 - but it was renamed due to pressure from religious fanatics) to Pleasant View, then 9 miles west on a mostly-paved road. The last 3 miles are good gravel.  There are six very nice picnic tables in the trees, and some restrooms.
Once back outside, a short trail takes you to the Great Kiva - one of the largest ever found - which the experts believe was used for large gatherings instead of private ceremonial events. 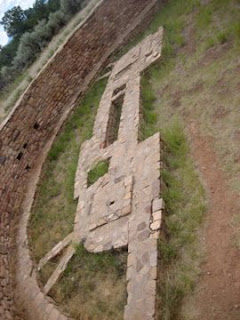 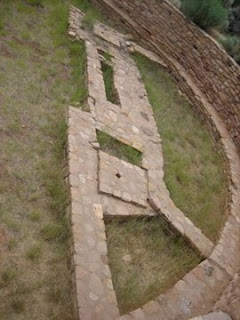 These two stone figures were mysteries to archaelogists until a Hopi visitor informed them that they represented Winter and Summer People.
Posted by Cyndi at 6:19 PM

WOW I love this post!! Im so fascinated by ancient civilizations and this Ruin looks to be quite amazing..thanks for all these wonderful photos--I def want to visit this place!