July 16
Like I've said in a previous post, I've always wanted to see "what's on the other side."  In this case, it's Owl Creek Pass, east of Ridgway.  Owl Creek Pass is famous for having several scenes from the movie True Grit shot here.  It's also considered by many to be one of the prettiest drives in Southwest Colorado, especially in the fall when the aspen are turning.

We saw in our book about fly fishing southwestern Colorado that the upper forks of the Cimarron River had some nice places to fish, so Don packed up his gear, I made a snacky lunch, and we took off.  The road is dirt, and rough in some places, but it's maintained for passenger cars. About halfway up there's a viewpoint - where I insisted Don stop so I could take a photo of the Sneffels Range to the southwest. 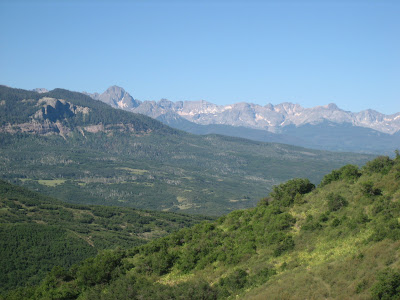 Picture this area dotted with golden aspen in the fall.  Mt. Sneffels is the large peak in the center left. 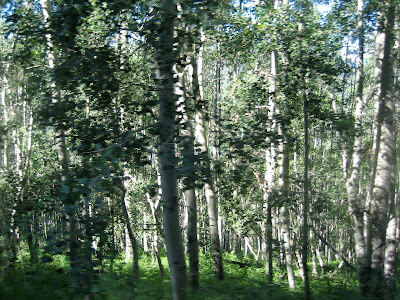 Aspen and more aspen.  Millions of them. 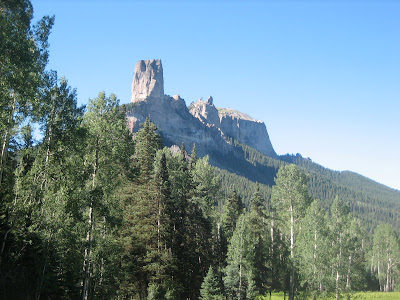 Chimney Rock near the top of Owl Creek Pass. 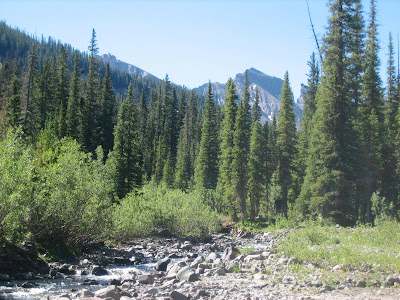 When we came down off Owl Creek Pass we took a right turn up the West Fork of the Cimarron River.  About two miles up, we found a nice spot where Don could do some fishing, and I put my chair under some trees to read and cross stitch while he fished.  This is the view south up the creek. I believe the name of the mountain in the center is Comb Ridge. 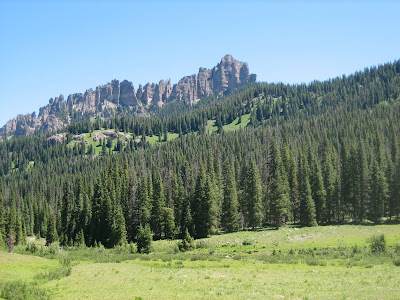 This was my view across the creek from my chair.  So nice!
Don caught (and released) several small fish in this creek.  After a couple of hours we drove down the road to look at the Middle and East Forks - and ended up at Silver Jack Reservoir.  There's only one spot where you can get down to the reservoir - and it takes you to some muddy flats that didn't interest Don at all.
From there we continued north along the Cimarron River, and found the best fishing at Big Cimarron Campground right along the river.  Another couple of hours there and we were done for the day.  Instead of going back upriver and over Owl Creek Pass, we drove north (and downriver) to Highway 50 - which we took into Montrose and then got on the 550 back to Ridgway SP.
Posted by Cyndi at 9:00 AM