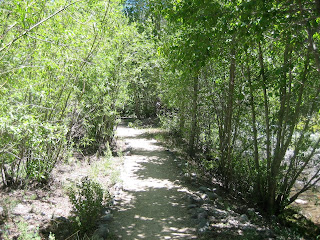 Today was a little bit frustrating and a little bit exciting.  We found one cache and didn't find two - for two different reasons.

We started the morning with cereal, since we both gorged ourselves at last night's barbecue and potluck.  After watching a little of the World Cup soccer, we decided to go find a couple of caches in Lake City. I thought we'd start with the easiest one first.  It was NOT easy.   The terrain was easy, but we never did find the cache, even though my GPS showed we were right on top of it. It was a micro, and was definitely hidden very well.  We searched for 30 minutes with no luck, and around noon, we both decided to give up and get some lunch.  That cereal just didn't last.

Lunch was great - we visited the Tic Toc Diner, which wasn't even 100 yards away from where the cache was. Don had a hoagie/sub called the Ham Load - and it had ham, cheese, and grilled bell peppers - an unusual combination, but something he really enjoyed. I had the cheeseburger - which came with grilled onions on it.  Yum.

Our next attempt at finding a cache was successful.  This one was about half a mile up Henson Creek along a pedestrian/hiking trail, and right next to the creek. 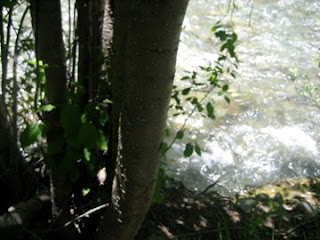 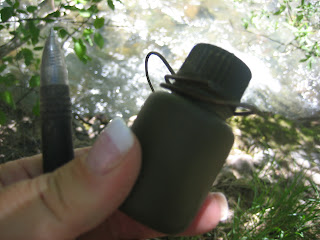 It was micro, so all we could do was sign the log - and we learned that we were the first to find it.  Yay! Our first "first!" We got back to the truck and I realized I'd forgotten to put the date on the log - and while I went back to do so,  I lost Don.  Wouldn't you know, he'd gotten his fly rod and was trying out the creek!

The next cache was supposed to involve a little bit of a hike.  We found the parking area, and then the trail  - which headed nearly straight up the mountain.  The description stated that it would "start out steep, then level out."  One of the logs (from a previous finder) stated that the steep part was only 20 yards.  WRONG.  The angle was extremely steep - dangerously so, for coming back down - and was at least 100 yards as far as we could tell.  However, after about 30 yards, we decided to give up. (Add to that, the mosquitoes were eating me alive!)  Don almost fell coming back down (which only bolstered our decision to quit.)

We came back to the trailer about 2 - and of course, Don decided to go fishing. I crashed.  I felt like I'd climbed a mountain.  Must have been the overeating the night before (and the hamburger for lunch) that made me feel so sluggish. I slept for an hour, and have been relaxing and browsing the internet.

Don just came back - said he had some great catches today. One was a 2 1/2-3 pound rainbow, another about 2, and the third about a pound and a half.  He never expected to catch any fish at all in the heat of the day, so he feels pretty good about his success.

We're kicking back now watching tv and enjoying the cool evening. I'm sure we'll both sleep well. I'm heading to Gunnison in the morning - I need to get my nails done and do some grocery shopping.
Posted by Cyndi at 5:45 PM

Howdy, my first visit to your blog, and it was fun reading about the Geocaching...Its something I would enjoy trying for sure!!