Note:  While I'm not giving the ID code # for this cache, I am giving spoiler information for it.
While we were in June Lake, we decided to take up a new hobby - geocaching.  I'd read about it on someone's blog, and then saw an article in a magazine - and did a little research.  I have an iphone, so I downloaded two critical apps:  MotionX GPS and Geocaching.  A search of the area close to us at the campground found several dozen caches, so on Sunday we set off to find some of them.  Our first one, which was also the closest to our campground, was associated with this 1937 Chevrolet Water Truck. We were treated to a little local history in the description, and were instructed to find a cache that had been placed nearby. 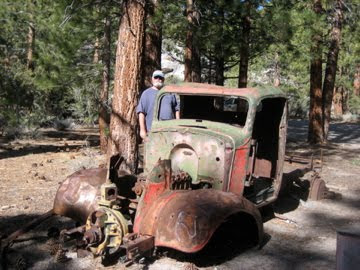 I have to admit that we were thrown at first by several other things in the immediate area of the truck. First, about 15 yards to the west, we discovered this contraption below - which I think is a guzzler. I mean, it's got water in it and two places for game to drink - but if I'm totally wrong, please let me know. 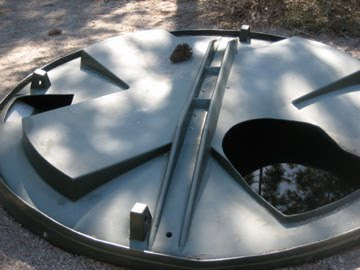 Next, we were thrown off by the fact (that we eventually learned) that this area is part of the June Lake Frisbee Golf course.  There are three numbered wooden stakes - one is IN the truck, and two others are equidistant from it, forming a triangle.  We thought at first they had something to do with the cache. Then, I spied this golden can sitting in plain sight under a tree: 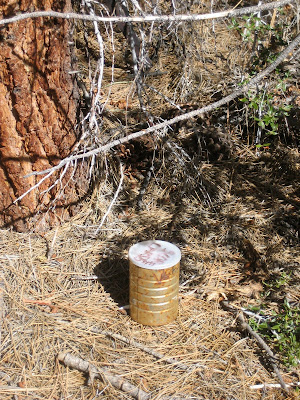 When I opened the can and looked inside, I discovered some pencils and some score sheets for the June Lake Frisbee Golf Club.  We realized then what we'd found.  There was also a tee box, similar to one on a regular golf course, over at another spot in the clearing.

So, we kept looking, expanding our search outward.  One of the hints had to do with "cement"-ing a friendship, and when I discovered this behind a huge boulder, I knew we were getting close: 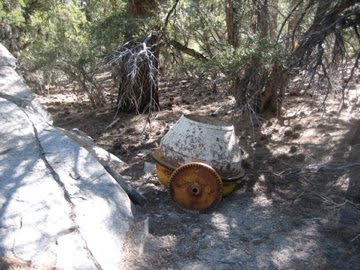 We walked all around the boulder a couple of times, and then spotted the cache in a crack (though it was under a rock and the pine cones you see in the photo): 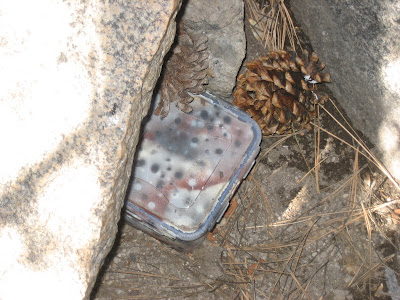 I opened it up, and found the log and several swag items. There were marbles, buttons, and a few other things, so I took one of the marbles. I had already decided that I would use dominos as my swag-to-leave, so I left a marble.  That marble made its way over to another cache later that day.

That was our first ever find; we found 5 more that day (and also had to record a "Did Not Find" on one), and one the next day. I'll describe a few of those in a later post.
Posted by Cyndi at 7:36 PM