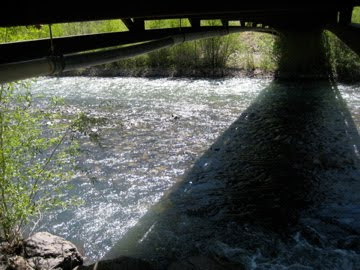 When I did a search for geocaches in or around Lake City, we found two that were pretty close. (The rest are up in the mountains or up Henson Creek canyon.)  The first one was underneath a pedestrian-only bridge across the Lake Fork.


Using the clues, we searched for about 15 minutes on the wrong side of the bridge. When we decided to go to the other side, we found it easily. 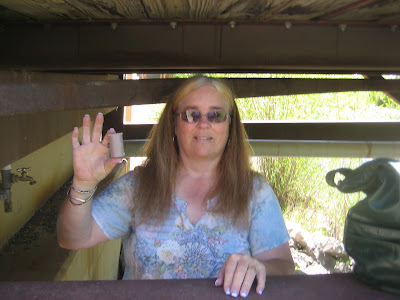 The second cache of the day was a virtual cache - and we had already visited that site during previous trips to Lake City. We went back, found the answer to the question, and claimed the "find."  This one has a lot of history - it's the memorial site where Alferd Packer killed and then cannibalized his companions during a disastrous winter expedition. 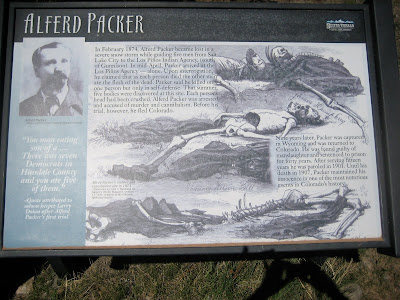 If  Hannibal Lector had a Grandfather, his name would be Alferd Packer, a man convicted of eating his partners.

The Packer case was the first, and possibly the only incident of cannibalism tried in the U.S. court system. He was born in Allegheny County, Pennsylvania in 1842 and migrated west in 1862. There is some confusion about the spelling of his first name. His tombstone reads "Alferd" and some say he spelled it this way.
In the winter of 1873 he was hired as a guide in Salt Lake City by 20 men for a prospecting trip into the San Juan mountains of Colorado.
He claimed to have driven an ore wagon in some of the mining camps of Colorado and that he could lead them to the valuable ore they were looking for. In truth, he knew very little about this region.
In January 1874 the group stopped over at the village of Chief Ouray and were warned not to try crossing the mountains until spring. Packer and five of the group decided to continue on into the mountains.
During early spring the rest of the group traveled across the mountains and inquired about the Packer party. A search team was then sent out to look for the missing men.
Two months earlier, Packer had appeared at the Los Pinos Indian Agency looking fit and well fed. His primary interest was in obtaining some whiskey, not food, and he had a large roll of money to pay for it.
He first said that he had been left behind by the others due to a leg injury. His story was to change several times...later being that one of the men went berserk and killed the others and that he had shot the man in self-defense.
An Indian guide found strips of human flesh on the trail and Packer was questioned. In August of 1894 the camp of the five missing men was found near Slumgullion Pass, 2 miles from Lake City.
Packer was jailed in Saguache and later escaped to Wyoming, and for 9 years lived under an assumed name until his capture. Packer was returned to Lake City in 1883 to stand trial.
The verdict was guilty, with death by hanging. The legend was that Judge Melville B. Gerry, on pronouncing sentencing said..."...There was siven Dimmycrats in Hinsdale County! But you, yah voracious, main-eatin son of a bitch, yah et five of them, therefor I sentence ye T' be hanged by the neck until y're dead, dead, dead!". This was probably not the exact statement made by the judge as he was a well educated man, but makes for good story-telling.
Later the sentence was reduced to manslaughter and he was given 40 years to be served at the prison in Canon City.
See http://www.archives.state.co.us/packer.html for additional information on Mr. Packer.
Posted by Cyndi at 1:07 PM