Exploring near the Continental Divide

Thursday, June 17:  Don wanted to do a little fishing at Rito Hondo Reservoir, which is up past Slumgullion and Spring Creek passes near the Continental Divide. When I looked up caches in the area, I saw that there was one at Slumgullion Campground, which was on the way, as well as a couple others.

When you're using an iphone for geocaching, you can't find any or use the application if you don't have cell phone reception. What you need to do is write down the coordinates beforehand, and use either a GPS or the GPS application on the iphone to locate the cache. This was the first time I'd use the GPS app, so it took a lot of tramping around in the woods to find the cache.

This is the old road from the campground that we followed for about 2/10ths of a mile too far: 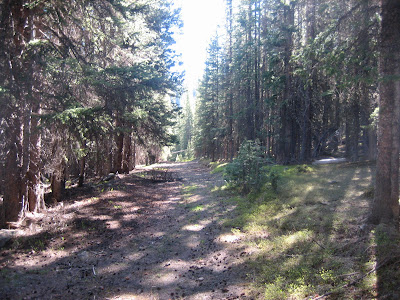 Once I figured out where we were supposed to be going, we headed off into the forest. I had my iphone and notepad in one hand, and my camera in the other - so when I tripped over a log, I had no choice but to do a faceplant into the brush. My right leg caught on several broken off limbs - and I scraped it badly in 3 different places. Upon standing up and brushing myself off, I was relieved to learn I hadn't broken any bones or tweaked any joints - but my leg sure was a mess on the outside!

It didn't take me more than 2 minutes after that to spot the cache - that horizontal log just looked a bit out of place: 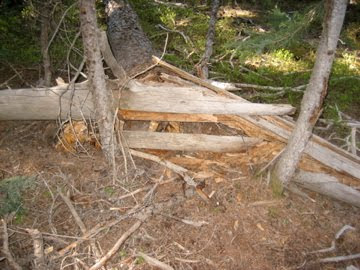 This cache was a 2-quart jar covered in cammo tape, and it had all kinds of swag inside. I signed the log, left a domino, and took an Air Force lanyard to drop off at our next find.

Our next stop was North Clear Creek Falls.  The stream meanders through an 11,000' valley for about 6 miles, then drops off a basalt cliff: 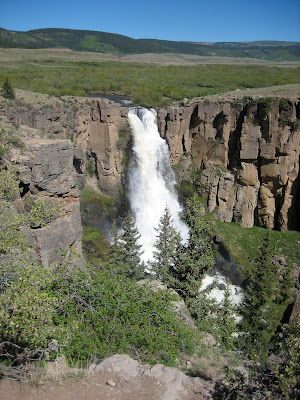 There is a cache nearby, but for some reason, my GPS was telling me that it was 8 miles away. I checked on the correct coordinates when we got back to the trailer, and I'd written them down correctly; I don't know what I did wrong for this one.  We're going to try it again in a few days since we want to go to Creede and it's on the way.

After the falls we went over to find a cache that was supposed to be near a waterfall going into Brown Lakes.  This was a fun one, and I did a better job using the GPS. At first we were on the wrong side of the falls. We moved over to the other side, and it took about 10 minutes of climbing up the left side of the falls to find the cache.  It was a 3" thick PVC pipe, about a foot long - also with a log and swag.  I dropped off the Air Force lanyard and a domino, and took a wooden geocaching token from a Kansas University geocaching club. 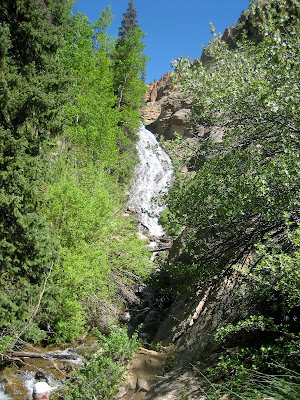 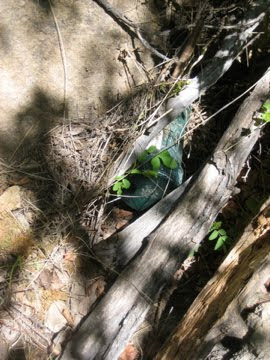 Here are the Brown Lakes. The large mountain in the center is the Rio Grande Pyramid. 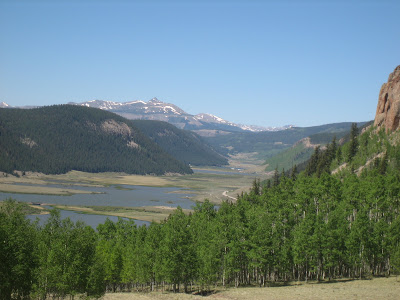