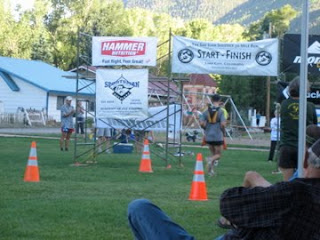 I need to start off today's post with an explanation - I guess I wasn't clear or complete in my previous post.  Here's the rest of the conversation:  I AM RETIRING ON JUNE 2, 2011.  Really.  There is just no way I can delay our dream any longer; Don's been retired from the Air Force since 1990 - it's about time I joined him.  (He didn't go into a second career like a lot of retirees do - but he had a full-time job. He is the one who got the kids up, dressed, fed, and off to school, was there when they came home, cleaned the house, and was the most fabulous, supportive husband anyone could ask for while I continued to work.)  So the countdown definitely continues!
Now, for today's fun:  the San Juan Solstice 50-Mile Run. It's an ultra-marathon - for those in the running community who like to do 50 miles or more, with extreme elevation changes. This one starts in Lake City at the town park, goes up Henson Creek to Alpine Gulch, complete with a number of cold-water crossings. It stays above timberline for 5-6 miles, then drops down Williams Creek to the Lake Fork at Williams Creek.  The race then climbs up to the old mining town of Carson, and picks up the Continental Divide Trail.  Again it's miles and miles above timberline, dropping slightly to Slumgullion Pass. From there it goes over the Cannibal Plateau and the Vickers Hump, and drops back down into Lake City with a finish back where it began.  The highest point of the race is at 12,800 feet.
It takes most runners 10 to 16 hours to finish the race.  Don and I went into town at 6 pm for some ice cream and decided to stay and watch a few runners finish. 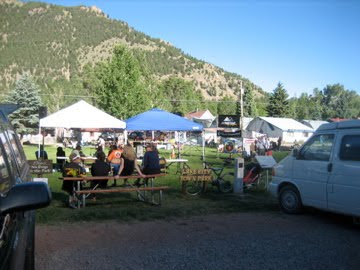 By then it was 13 hours of racing, and only 80 of the 200 runners had already finished. We watched about 15 come in during our time there, including a married couple from Huntsville, Alabama. 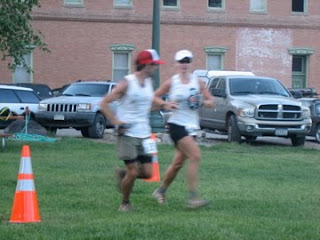 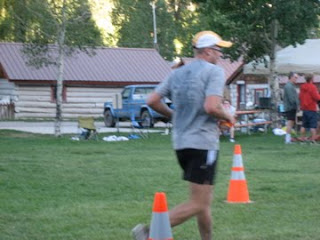 I walked over to the finish board to check out the times, and learned that this year's winner, a 19-year-old, finished in 8 hours, 13 minutes.  The course record is 7 hours, 59 minutes.  We also learned that when they closed the last aid station (there were 6 along the course) there were a good number of runners who hadn't made it yet.  They cut off the times, giving runners 16 hours to complete the race and get an official time.  The race organizer said 70 to 80 percent of the runners make it within the 16-hour cut-off time.

Around 7, Don and I decided to go upriver and look at some fishing spots.  As we got about 11 miles upriver, we passed a runner who was walking along the road back towards town.  (Clearly not on the course any longer.)  We decided on our way back to see if he wanted a ride back to town.  As we pulled alongside him, Don asked him if he was interested in a ride.   He asked, "How far is it back?"  I said, "About 10 miles."  He said, "Nah, it's not that far, is it?"  I was insistent, and he said, "You know, I think I'd better ride."  He was from Steamboat Springs, and was a late entrant into the race.  He made it up Alpine Gulch, across to Williams Creek, and up to Carson and the Continental Divide.  But he said he sprung a leak in his Camelback water carrier, and realized that he was not going to be able to make the cutoff at the next aid station. He was advised by someone at the Divide aid station that he could go back down via the Camp Trail - and was about a mile past the bottom of that trail when we picked him up.  He said his legs were giving out from the downhills - and when we dropped him off back at the finish line, he could barely walk.  Looking at the map, my guess is he made about 30 miles. Still an achievement of some magnitude!

If you'd like to look at a fabulous slideshow of last year's race, go here.  You get to see some wonderful shots of the terrain above timberline in several parts of the course.  For all the information on the race, go to the San Juan Solstice website. There's a good topographic map of the course here.
Posted by Cyndi at 8:19 PM