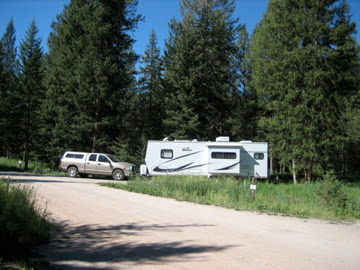 We spent four nights on the Gallatin River, about halfway between West Yellowstone and Bozeman. There were two things I really liked about this campground: 1 - it had electricity, and everyone knows about the heat wave we've been having. We were able to use the air conditioner when it got hot! 2 - we had the site at the end, where no one was next to us, and it was about a 20-yard walk to the river. The only down side was that we didn't have water or sewere hookups - meaning no shower for 4 days! 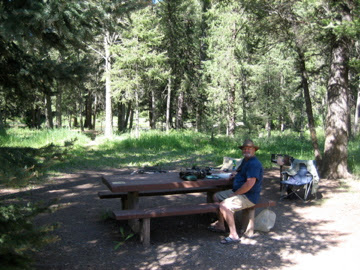 This was our "front yard" - trees and the river. 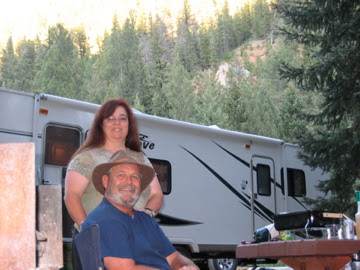 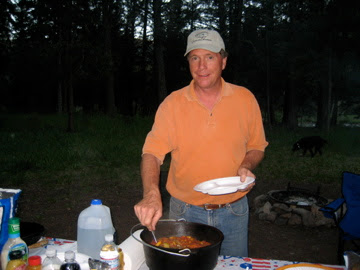 Our second night there, we were joined by some friends of ours who used to live in Yucaipa but now live in Bozeman. Doug and Margo are such wonderful people with huge hearts, and they've raised four fabulous kids. That's Daniel, their second-oldest, who was a student of mine in 9th grade English. He played on two soccer teams with our son Kenny. Taylor, their oldest, isn't in the picture because he went fishing before dinner. They have two daughters, Maggie and Hayley, who were also students of mine when they were freshmen.


Margo took this shot of Don and me so you can see what we look like these days!

Doug and Margo had just finished taking a course on using dutch ovens, and they brought theirs along to use for special dish. All I can remember is that it had red rice, diced squash, tomatoes, fish sauce, and Chinese 5-spice powder. While Don, Doug, and Margo liked it, Daniel, Taylor, and I didn't. Oh well. Maybe too much of the 5-spice powder. 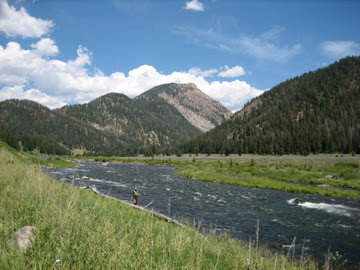 It was such a fun time catching up with them on everything, and finding out what their lives are like in Montana. I didn't know that they lived there before they came to California. Doug recommended a fishing spot on the Madison River between Hebgen and Earthquake Lakes, so we went there the next day. Talk about beautiful! And since it was the fourth of July, it was pretty busy --must have been 50 people on the 3-mile stretch between the two lakes. But he had a nice time, and I spent it cross stitching. That will be the subject of other posts.
Posted by Cyndi at 10:20 AM