How I Spent My Birthday, Part 2: Cooke City to Red Lodge 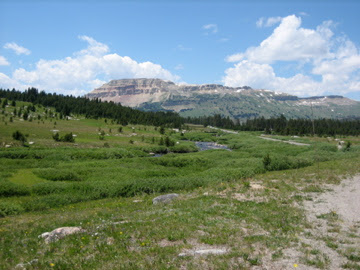 The Beartooth Highway leaves the valley of the Clark's Fork and goes up, up, up, to the "Top of the World," where Beartooth Creek flows along the road for about two miles. Of course, Don could't resist getting out his rod and giving it a try. 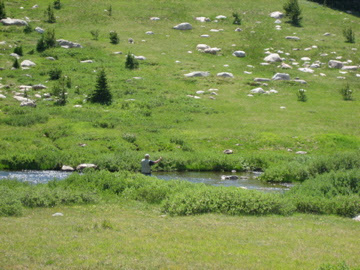 About the third cast, he got a strike, and caught (and released - he always releases) several small brookies. 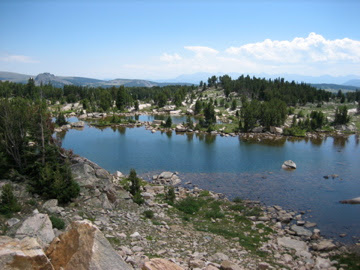 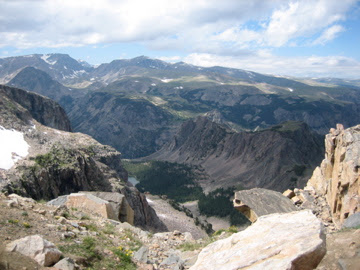 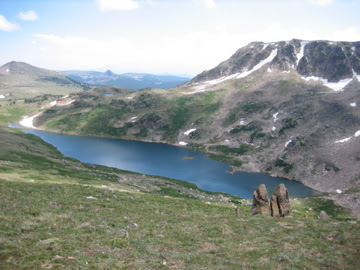 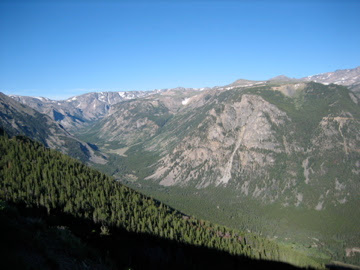 From the "Top of the World," which we learned really isn't the top, the road begins to wind its way upwards, past dozens of lovely alpine lakes, including this one. I made Don slam on the brakes so I could get a picture of these two, just because I thought they were so beautiful. 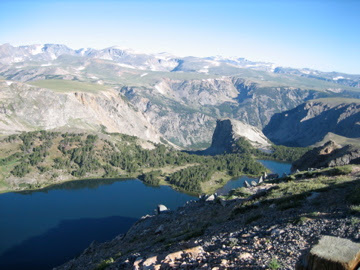 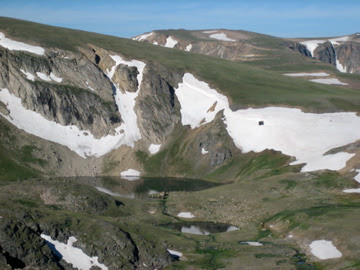 After you reach the summit, there's a lookout to the west at the top of Rock Creek Canyon. See the U-shape? That's a classic example of a (formerly) glaciated valley.


My camera doesn't show the depth here - it's really much steeper down to Gardner Lake than it looks.


Here's another view of Rock Creek Canyon, from the place where you start heading down.


Back to the geology lesson - doesn't that rock look like Yosemite's Half Dome? That's because it was formed exactly the same way. Once upon a time, it was a rounded huge granite knob, and then the glacier, through centuries of grinding, cut it right in half as it passed.

From here, the road drops down into Rock Creek Canyon, and goes north into Red Lodge, Montana. We had a reservation at Rocky Fork Inn, a nice-looking bed and breakfast. We pulled into an empty parking lot, confused by the signs in the window that said "No Room at the Inn." We assumed that all the rooms were taken, so we proceeded to take our bags out of the truck. As we headed for the front door, the owner came out to inform us that her sewer line had broken, so she couldn't give us a room. Ack. What to do? She said that all the other B&B's in town were full, and it was a loooonnngg ride back to Cody. So, we took a room at the Comfort Inn. Not exactly plush, nor was it the "Romance Room" I'd booked at the B&B. But we made the best of it, and enjoyed a great dinner at a local restaurant- probably the best filet mignon I've ever eaten. Don had a buffalo ribeye and proclaimed it excellent as well.
Posted by Cyndi at 10:23 AM