Getting Away From it All 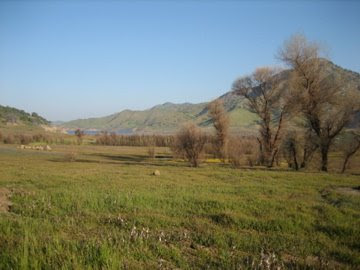 The past two weeks have been spring break in our school district, and Don and I spent the first 11 days of it in the southern Sierras. First, we went to a place new to us - Kaweah Lake. It's between Visalia and the south entrance to Sequoia National Park. We camped at Horse Creek Campground, and for most of our stay had our loop of the campground to ourselves. I called our site "a room with a view." I sat outside nearly every day while Don was fishing, just so I could enjoy that view. To our left was Lake Kaweah, and to the right was a view up the Kaweah River. 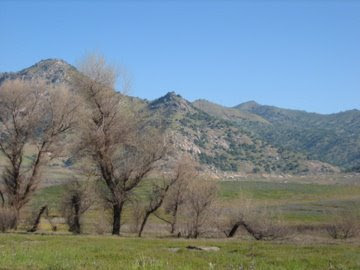 We learned that the lake was built for flood control, and it fills up every year. By the end of May or early June each year, the water comes up and covers almost all of the campground. We could see it changing each day we were there - small islands and bushes became covered by the end of our stay. The campground is not open during the summer - it's under water! 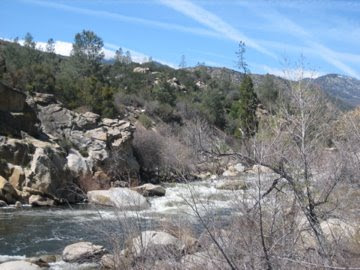 After we left Lake Kaweah, we had reservations at a Forest Service campground on Lake Isabella. When we got there, it was a nightmare. First of all, more than half of the campground was closed - and I'm sure that's where the sites were that were large enough for RVs and trailers. We drove through a few loops - getting stuck several times and tearing up the side of our trailer against some trees and rocks. When we could finally make it back to the entrance, we saw that there wasn't even a camp host there to tell us where a decent site could be found. Soooo, we decided to go to Don's favorite campground - Rivernook - a private campground with full hookups and CABLE TV. Yeah, we were really roughing it. But he likes Rivernook, since he can fish in the Kern right from the campground. He also can drive up and down the Kern and fish all he wants. The picture to the left was taken from one of the places we stopped (the day I accompanied him up the river). Six days there was nice -all I did was sit and cross stitch and read and not even think about work.
Posted by Cyndi at 10:35 AM