It's All About the Buffalo 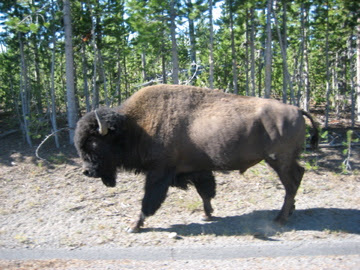 On Friday, we left Red Cliff Campground to go to our next destination near Cody, Wyoming. On the way we had to drive through Yellowstone National Park, where the only traffic jams were those caused by buffalo. This one held up traffic for only 5 minutes or so on the road between Norris Junction and Canyon. 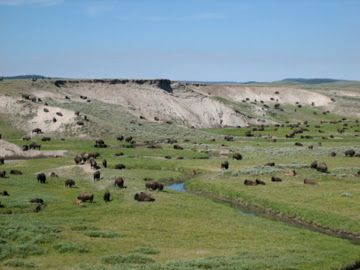 This is part of the enormous herd that was sprawled all over the Hayden Valley. Near the Mud Volcano, we were stopped again by one stubborn buffalo who stood in the middle of the road blocking traffic for 20 minutes!!!!!! It was almost comical, but I'm sure that folks were getting a bit aggravated about the backup of hundreds of vehicles. We were about fifth in line, and could see him just standing there, chewing his cud, and refusing to budge. When he finally began moving, everyone who had been standing around gave sighs of relief and got back in their cars to move on. 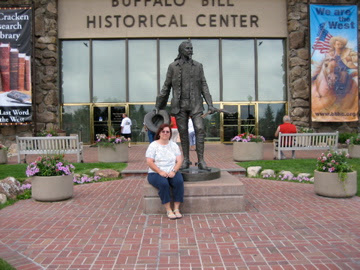 After the drive through Yellowstone, we came out the East Entrance, picked up the road along the North Fork of the Shoshone, and stopped at our "home" for the next 8 days, Yellowstone Valley Inn and RV Resort about 15 miles west of Cody, Wyoming. Yesterday we did what we've been looking forward to for this stop, which was spend the whole day at the Buffalo Bill Historical Center. It's 5 museums in one complex - one dedicated to the life and times of Buffalo Bill (William Cody), another to the Plains Indians (that was my favorite), another to the natural history of the Greater Yellowstone Ecosystem, another to western art, and one to firearms. We spent 6 1/2 hours there - and probably could have stayed longer if our knees and backs hadn't started hurting from all the walking and standing. What a great place to go!!!!

I also located the local needlework store - Iron Kettle Needlework, and picked up some patterns and supplies. I want to go back when I have more time!

Don's already been fishing a great deal on the North Fork of the Shoshone - it runs right next to the campground. Right now he's upstream a few miles - trying out some spots recommended to him by the owner.
Posted by Cyndi at 10:21 AM