On the (Windy) Road Again 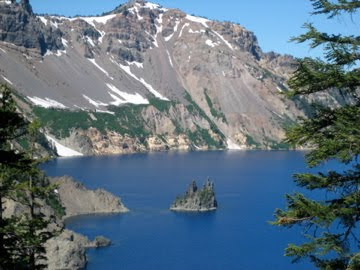 Phantom Ship Island in Crater Lake Crater Lake National Park, Oregon 2009
(NOT where we are now!)

WINDY - as in WIND. We left home at 5:30 and had a nice breakfast at Arthur's in Mentone. (Why are their breakfasts so HUGE? They let me order off the senior menu because it had "smaller" portions - my French Toast plate had 2 thick pieces of French toast, 2 eggs, and 2 pieces of bacon - I didn't even eat it all.) By 6:30 we were on the road north. As soon as we got to Adelanto on the 395, we hit the wind. A system had come into California and was causing winds all through San Bernardino and Inyo Counties. We were heading right into it, so while we weren't ever in much danger of toppling over, it forced us to drive at 55 and below - mostly below. We used up 3/4 tank of gas just from Pearsonville to Bishop.

But we made it, and Don said he felt like he'd been run over by a semi from maintaining control of the truck and trailer for so long. So he took a 2 1/2 hour nap - and still was able to sleep last night.

Dinner was hamburgers and fried potatoes - comfort food. We either have hamburgers or chili dogs on our first night out - it makes it feel like "camping." We had no difficulties setting up the Carryout dome, but had to call DirecTv to get the receiver activated again. We'd replaced that receiver in the living room with a DVR, and told them we'd use the old receiver in our trailer. It was a simple matter of dealing with the overly-friendly computer voice, and it was fixed.

We're staying at Highlands RV in Bishop - it's on the 395 after you make the big left at the Highway 6 turnoff, and it's next to the smoked meats store. If you've never had the smoked meats, you have to try them. Really, really smoked. My favorite is the breakfast sausage - links that are about an inch in diameter and 4 inches long. I haven't seen an unsmoked version of these anywhere. I plan to pick up a few while we're here.

Highlands RV is Don's choice of campgrounds mainly because it's close enough to the fishing on the Owens River. He goes to the campground just below Pleasant Valley Reservoir dam, and has a 4-5 mile stretch that 's open year round. He walks the whole length and loses track of time - sometimes he doesn't come back until 3 or 4 in the afternoon, after leaving at 8 am. One time he forgot to take water, and was nearly sick by the time he got back here.

Highlands is what I call a parking lot campground. It's completely paved; most of the the sites are side-by-side pull-throughs. There's no tenting here - and of course, no grass anywhere to pitch tents if you wanted to. There are a few full-time residents along the far wall and in the back, but this is a clean, well-kept park with nice bathrooms and laundry, free wi-fi, and a friendly manager. It's right on the highway, but you can't hear the highway noise at all. About a mile up the road is the Paiute casino - we've never gone there because we've been too busy doing other things, but we might go this time just to spend a roll or two of nickels.

Right now Don is on the Owens. I did some sewing for a little while, and now I'm catching up on reading blogs, checking email, and tending to Wanderlust.

I'd like to welcome my 4th follower - Margie! Margie works on two blogs - one is Bruce and Margie's Full-Time Journey, and the other is My Healthy Living Through Weight Control. My husband's uncle Bruce, who died 2 years ago, was married to Marge - so these two names just go together in my mind. I plan to visit Margie's second blog a lot, since I need to keep working on being healthy. As I get closer to retirement, I don't want any weight/diabetes-related issues to slow me down.


Last week I did some work in the trailer that I want to share. First, we had taken the doors down to the bedroom - the track for one of them had come loose from the ceiling, and we discovered it was held up only by a few flimsy nails. Stupid designing, in my opinion. We took the doors out before our summer trip last year, and Don didn't like the glare of the sun coming in from the front door when he was taking a nap. So I made some curtains, which we hung on small tension rods. I got the fabric, a heavy duty household fabric, from JoAnn's, and used a large scrap to recover our ottoman/storage cube. 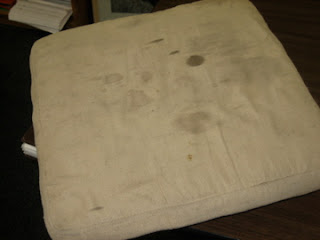 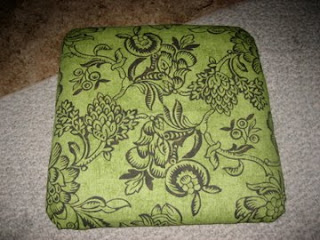 Next, I replaced the foam in the cushions on the sofa sleeper. The old cushions were soft and thin, and rested right on the base of the sleeper part of the sofa sleeper. They were horribly uncomfortable. JoAnn had some heavy-duty 5" thick foam, which I cut to the right shape using my electric knife. Since it was impossible to stuff that back into the zippered upholstery, I made some "pillowcases" out of cheap muslin. This made the foam cushions slip right into the upholstery. Don went to the hardware store and got a piece of 1/2" plywood, which he cut to fit underneath the cushions. It's almost too hard now, but a small pillow under my thighs makes the couch a whole lot more comfortable to sit it than before.

Thanks for the welcome. I enjoyed your post today, especially the info on the RV park by Bishop. I always like to read about RV park reviews. Good info to stash away for future use.

Looking forward to posts from the great North (relative to Yuma). Two years ago when we traveled down highway 395 in late April and early May we had heavy wind for much of the trip. Is that just the way it is for spring there?
We just replaced the cushions in our dinette and it does make for more comfort when you don't bottom out.
Happy travels!