Boy are we tired. I think now that the sun has gone down I've finally cooled off. We spent the day in Death Valley - and even in March, it's already hot.

We left about 8:30 this morning - took the route from Lone Pine along the north side of Owens Lake, and up into the pass in the southern Inyo/northern Argus Mountains. Our first stop in the park was the Father Crowley Viewpoint. It sits next to Rainbow Gorge - which really is more colorful than my photo shows. As we got out of our truck, we heard the roar of jets - 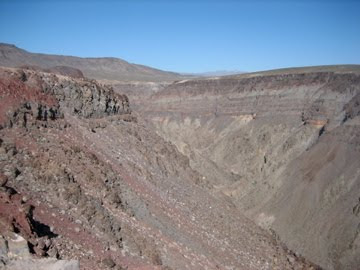 and looked DOWN. Two F-18s were coming through the gorge below us, and then catapulted up and around - and came by a second time. Being the daughter of an AF pilot and the wife of a retired AF guy, it was thrilling. 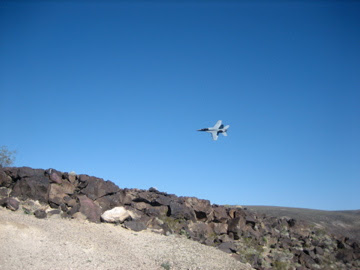 Below is a look north from the viewpoint to the Panamint Dunes in upper Panamint Valley. 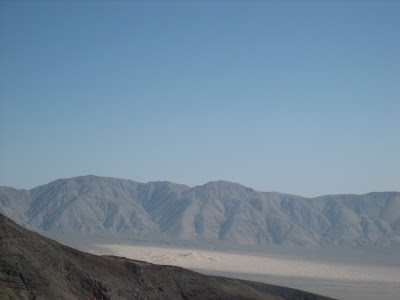 Below, the road winds its way down 4000' to the valley floor. We'd crossed one mountain range - still had another one to go. 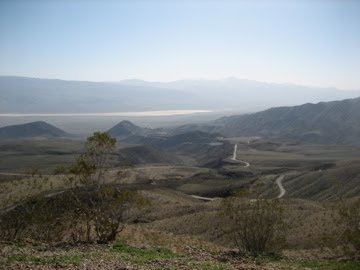 Right after you cross the Panamint Range, you come to Emigrant, which has a gas station and a small campground. A 2.4-mile bumpy dirt road takes you to the mouth of Mosaic Canyon. A short hike goes into the canyon, which is a slot canyon cut into the dolomite and the breccia. Below is the mouth of the canyon - and you can't tell yet that it's going to be a slot canyon. 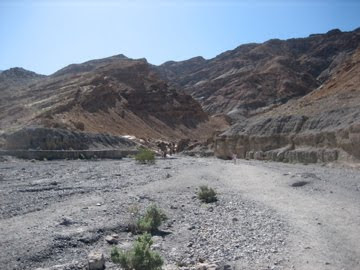 Below, Don is coming back down from a wider section of the upper canyon. 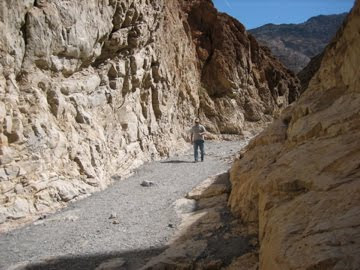 This is one of the narrower sections. 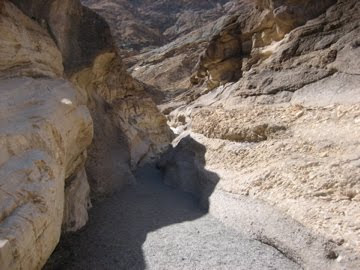 And here am I, looking rounder than I think I look (!), in one of the narrow portions. 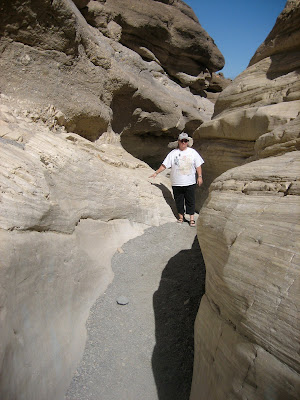 From Mosaic Canyon we next went to Salt Creek. It's a creek that runs about half of the year, and during the spring it has a huge population of pupfish. There's a "nature trail" - a long boardwalk that runs along the creek and through a salt marsh, where you can look down into the water and see the millions of tiny pupfish feed and mate. 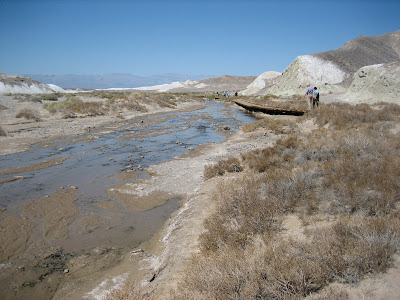 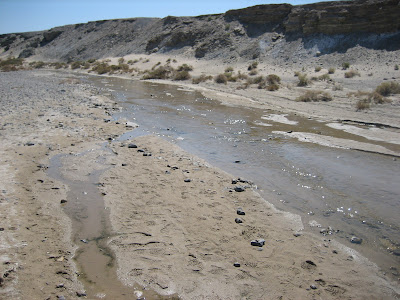 We then saw this little guy sunning himself on the boardwalk. He was not afraid of all the people walking by. 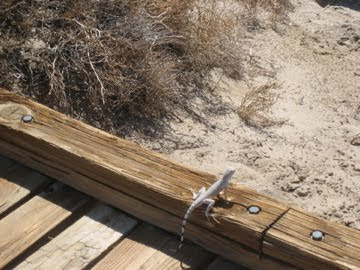 By the time we finished the walk at Salt Creek, it was 12:45 - so our next stop was the cafe at Furnace Creek Ranch. We had some good burgers and fries, with several glasses of ice water, and headed over to the Visitor Center. We like a good Visitor Center - it must have a slide show or film, which this one did, and a good interpretive section, which this one sort of had. I wish it had been more. I would have liked a lot more on the history, geology, and wildlife of the park - especially since Death Valley is so huge. But we still enjoyed ourselves there, and decided that from there we'd head back to Lone Pine (and skip the drive to Badwater).

Sooooo, back over two mountain ranges and to our very hot trailer here at Boulder Creek - but with the windows opened and the sun going down behind the mountains, things have cooled off wonderfully. Dinner for me was cold cereal - no way was I interested in cooking anything. Don had a sandwich. Bedtime will probably be early tonight.

Cold cereal? Really?
It sounds like you really had a great time. Enjoy! Porter and Vicki

Great pictures! I hope we can visit there someday.

I just tried to send you an email, but it seemed to balk at a couple of things. Fist it said my message was to long, I shortened it, and then said my email address was invalid.

So I'm adding it here: Hi Cyndi, I just read the responses to you on Somewhere in Time. I agree with you, and am surprised that you got scolded for "spelling" it out. BUT he did ask what was said!