Maybe a BIG change in plans... 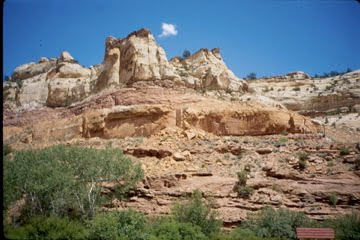 First, I'd like to acknowledge my first three followers. Welcome to Marie, Vicki and Porter, and Freely Living Life. Thanks for being here! I enjoy reading other people's blogs, and hope that mine is worth reading.

*******
Today I received an email/letter from the District, in which they officially offered the early retirement incentive we've been trying to get them to offer. Up until today, I'd been planning to retire in either 2 or 3 years. But when I started talking about the incentive to my friend and office manager, she said some things about finances, and credit, and so on - and told me I'd be stupid to not take the incentive. It's a gift of a LOT of money. Yes, I know that because I'll only be 54 in July that we'd have a year before the STRS kicks in, but that incentive will be enough for us to live on until then. (Don will still be drawing his retirement check from the AF for 4 more years.)

I came home, mentioned it to Don, and was able to convince him that it was something we might just be able to do. He got out the calculator, bills book, and scratch paper, and I got on the computer, and together we crunched numbers, argued, made lists of questions, and have decided to ....investigate further. I will go to the meetings at the District office, make my appointment with the STRS counselor, call my financial advisor, and continue to crunch numbers.

IF THIS WORKS, we'll be putting the house up for sale in a month or so - so that it's clean and empty and ready for viewing while we're in Colorado for the summer. I can't believe I'm even writing all this. It's almost surreal.

In the meantime, I got rid of more stuff yesterday! Two sleeping bags, two backpacks, two tents, assorted camping gear - all through craigslist. Then I gave my friend Tara a tub of assorted stuff, a sewing machine, and a hedge trimmer to see if she can sell it all at her garage sale this coming weekend. Vicki and Porter said getting rid of everything would be liberating - and it is. It's exciting, too! We're using the money wisely - I've gone 3 weeks without buying anything new except for 3 full-time RV books. I keep looking around the house, and see more and more things that will go to the garage sale - my friend Patrick says we're now going to have it at his parents' house (Suzy is retiring in June for sure). It's a good location, more flat area to put more stuff on display, and they'll be adding a lot of their own stuff. Should be a good weekend.

We are so excited for you!! Surreal is right...you'll have to pinch yourself more than once before this process is over with. Best wishes to you that this works out and goes as smoothly as possible. We're cheering for ya! <3

May you have good health and good health insurance as you move forward in this adventure! There have been so many silver linings along the way as well as challenges too.

I have been working on my whimsical store http://www.thatwhichisgood.com and slacking on my blog these days.

Wow! Great news! Congratulations, and hope it all works out for you. See you down the road!