Nice day in the Park

We just returned from a trip through the Park. We are camped at Valley View RV Park on Henry's Lake, which is about 14 miles west of West Yellowstone. This is the first time I've had WiFi for a couple of days, so I'll briefly catch up.  Since my last post we left Elko, drove to Arco, Idaho, where we stayed one night, and then came here.

Our experience in Arco was worth noting - we'd called two days prior to get a site, not knowing whether the campground was open or busy or what.  When we arrived, no one was there. No one. The office was closed, but we'd been told to look for a sign on the door.  It was there - a generic "take your site and pay in the envelope" sign, along with the code for the restroom and the rates for 30 or 50 amp/Good Sam.  We drove out to a place where we knew we'd have the open sky for our satellite dish, and I put $27 in the envelope (30 amp site with Good Sam discount). Don and I walked down to check out the restrooms - roomy and clean, and after dinner enjoyed long, hot showers. The whole afternoon and evening, no one was there. We had the whole campground to ourselves, which was both peaceful and a little creepy. No one was there when we left in the morning. A bit strange compared to the experience the night before in Elko, where we'd gotten the last available spot in a fully-booked campground.

Yesterday we arrived at Valley View RV Campground, where we were greeted by some full-timers from Riverside, California. They're here to work for the summer. Valley View officially opened for the season yesterday, so there are only 3 other rigs here. The bathhouse isn't open yet, and last night the WiFi wasn't working yet.

This morning, we decided to go into West Yellowstone to see where I'll be checking in on Monday, look for a barber, and pick up some groceries.  We found the Human Resources office for the Delaware North Companies, and didn't find a barber.  Then, Don said, "Let's take a ride through the park and check out the store and the campground in Gardiner."  So off we went.

About 3 miles into the park, we came across the first animal-caused traffic jam.  The road parallels the Madison River, and over on the far side of the river was a herd of about 40 buffalo - with babies! - attempting to cross the river.  But dozens of cars were stopped along the road, and people were outside with their cameras, and the buffalo were getting a bit upset about it all. The reason I know this is because I also got out, but before I could take a step, a ranger came by and used his loudspeaker to tell everyone to get back in their cars and get out of the way. He said they wanted to cross the river but wouldn't/couldn't as long as people were in the way.

We turned north at Madison Junction, and then stopped at Beryl Spring, a large fumarole and hot spring right next to the road. (A fumarole is a steam-producing vent.) 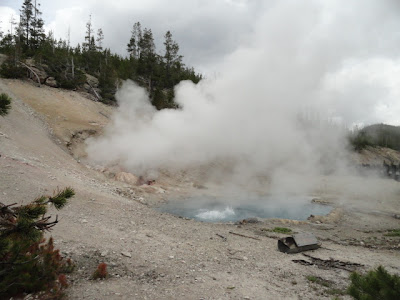 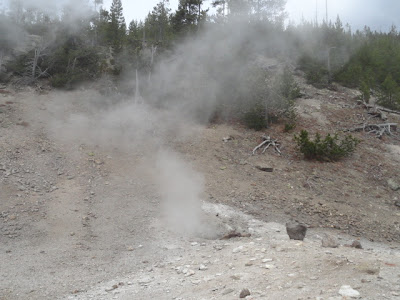 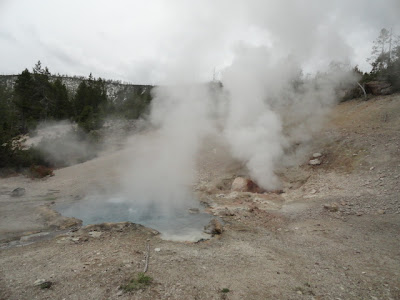 A little further on, just above Gibbon Falls, we stopped at Gibbon Picnic Area, and Don checked out the river for future fishing. 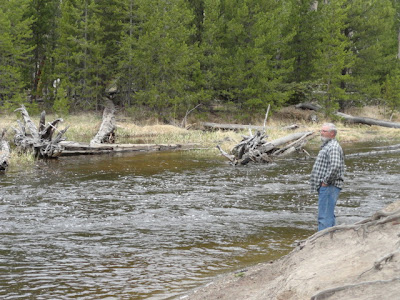 Then we continued on, past Norris Geyser Basin, through some lovely high country, and then dropped down into Mammoth Hot Springs. There we stopped at the General Store, where I met about 6 of my co-workers and took a look around.  Then we drove to Gardiner, and checked out Yellowstone RV Park, our home beginning tomorrow. We met the managers, saw our site, and then went to the Two Bit Saloon for a wonderful lunch. (They have the best French fries! Freshly cut and with the skins still on.)

We went in search of Joffe Lake, which is accessible through one of the employee housing areas, but didn't find it. What we did find was this: 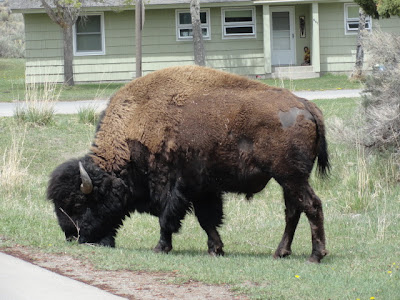 Apparently you don't have to mow your lawn there - the bison will take care of that for you!


Our next stop was up at the top of the Mammoth Hot Springs terraces - there's a loop drive to take. 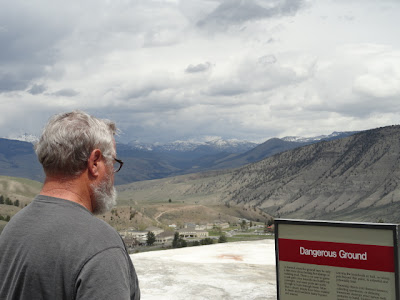 You have a fabulous view down to Mammoth Hot Springs. 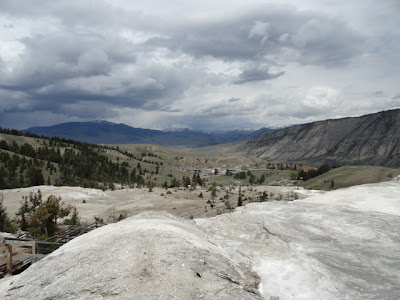 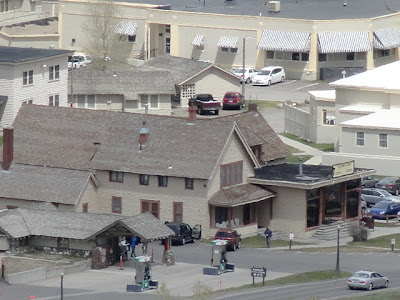 Above:  I was able to zoom in on the General Store where I'll be working. 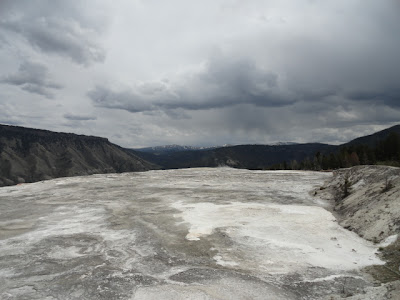 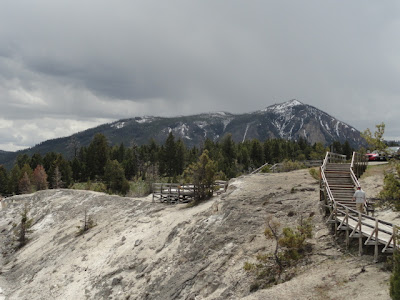 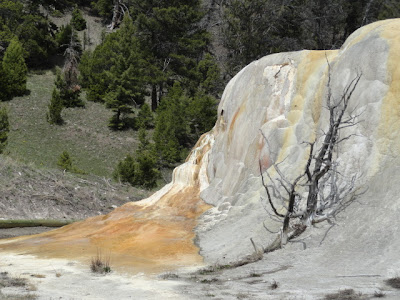 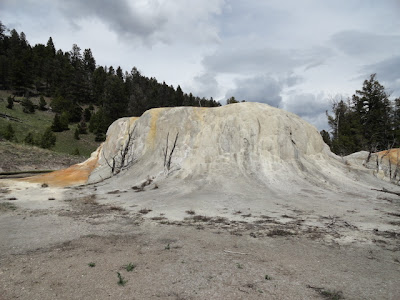 Above: the appropriately-named Orange Spring Mound

As we headed back south, we stopped at the Obsidian Cliffs, but instead of taking a picture of the cliffs, I took this one of Obsidian Creek.  Don will be fishing this one. 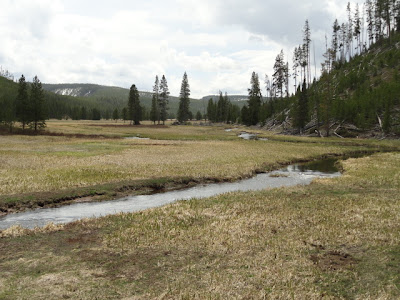 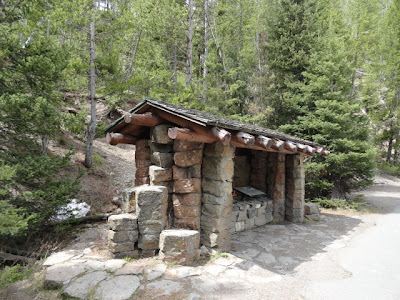 This little exhibit shelter for the Obsidian Cliffs was built in 1931, as part of a system of outdoor "mini-museums."


Our last stop was Roaring Mountain - so named because there are so many loud fumaroles on the side of the mountain. 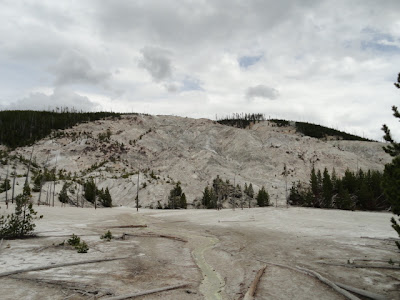 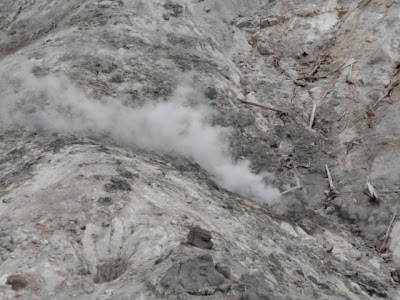 We drove back to West Yellowstone, picked up some groceries, and then came back to our trailer here at Henry's Lake.

Tomorrow we move for the last time for almost 4 months.
Posted by Cyndi at 3:32 PM

You are going to be so busy working at that store this summer!

I hope to work at Yellowstone in a few years, so I look forward to your posts of the area and the job. Did you bring sewing/quilting supplies with you?

You'll have to let us know how you like working in the N.P. We were going to do it last year, but we needed more income than that. So instead Bob got a job in San Antonio as a Controller (Accountant) and we took a six-week vacation to Yellowstone (two weeks in the park, four weeks driving to and from whilst seeing the sights along the way).

Ummm, correct me if I'm wrong, but I thought the creek he's thinking about fishing in was a hot (as in boiling hot) creek. Might want to check on that. (I could be thinking of the wrong creek.)