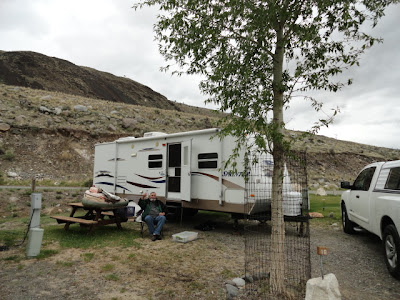 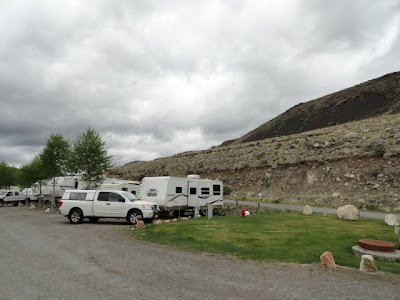 I think we have one of the nicest spots in the park. There's no one on one side of us - just a "yard" that even the dogs have been banned from. On the other side, with lots of room to spare, is a small trailer that has a single guy in it whom we've seen just once in two days.

We're close to the restrooms and laundry, and the park is close enough to town to dash to the store for a quick pick up if I need something.

We got here yesterday around noon, and there was still an RV in our site. We checked with the manager and found it it was a gal who was in training in the park and was running late. Sure enough, she showed up and said she'd hurry.  She took about an hour to pack up and go, and then we were in our site.  After relaxing for a bit, Don asked if I wanted to go out and eat - you don't have to ask me twice!

Based on Yelp! reviews and a recommendation from the manager, we went to the Raven Grill.  It was definitely a good choice.  While the interior reminds me of a little rustic diner, the waitress was friendly, the service was prompt, and the food was outstanding. They're known for their steak, so Don and I each had a ribeye - I had the 12 oz. and he had the 16 oz.  The salad was great, and the steaks come with Delmonico potatoes - cubed and cooked with breadcrumbs and some cheese.  They were a bit  like au gratin potatoes but not creamy.  They also served us some homemade Worcestershire (that's what they called it) but it was really a dark sweet and savory onion chutney.  It was great on the steak, though the steak was good without it, too. Dessert was sublime - a huckleberry creme bruleé - the custard had a few huckleberries in it, and on top of the crystallized sugar topping was some huckleberry syrup.  I will go back and repeat that meal!
Posted by Cyndi at 2:20 PM