It is so pretty here!

This morning the sun was finally out with no clouds in the sky at all.

I walked over to the edge of the campground to get a nice shot looking west up into the Emigrant Wilderness.


Since the wind wasn't blowing, Don decided to try his luck in the float tube on the reservoir.  He walked out to the edge from our campsite, and came back 5 minutes later. He said he'd gotten about 15 feet away from the shoreline, and started to sink in the mud. The water was still not deep enough to sit down in his tube. So, he took the truck down to the dam, where he could put the tube in easier. He returned around noon, since the winds started to pick up, and said he hadn't gotten a single bite.  (This was after having 5 straight days on the river with lots of fish biting.)  I suggested he go back on the river, but he said someone told him the fish were biting on Lower Twin Lake, and was going to go up there.  He also thought it wouldn't be as windy up there. 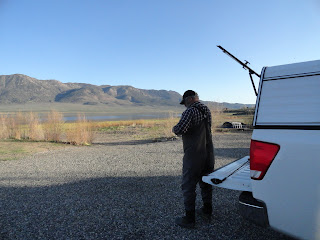 He just came back a few minutes ago (dinnertime), and said he didn't get a single bite up there, either. And to top it off, he'd forgotten to put any beer in the fridge to get cold, so the day was just a total loss. ;)

I sewed all day - I brought a tub of "kits," which are made up of fabric I pre-cut into all the necessary parts for quilt tops.  I'm halfway through my second top of the trip.
Posted by Cyndi at 4:41 PM

That is a great view!