Figuring out a countdown 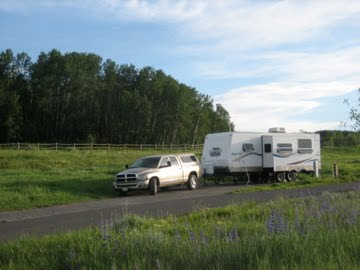 Vega State Park, Colorado
Summer 2008
I saw this on the RV Dreams website today:
"Go confidently in the direction of your dreams.  Live the life you have imagined.  As you simplify your life, the laws of the universe will be simpler." Henry David Thoreau


And to go with that oh, so, appropriate quote, I'd like to welcome our 10th follower, Heyduke50. He and his wife are counting down the days until they hit the road. As of today, it's 322, according to his blog. That's a few months fewer than we have.  Lucky guy.

I have a new way to get rid of my stuff to add to my ebay, craigslist, freecycle, trash, and so on.  It's called "give it to you daughter."  Theresa came up today for the first time in months to do her laundry and have dinner. Not only did she take home a wall-hanging, 2 framed photos, and a Japanese samurai statuette, she has laid claim to quite a few other things that we're holding on to until next year. I'm going to do the same thing when Kenny comes home on leave in a few weeks: have him pick out what he wants, and mail it to himself or have us mail it when he gets to his next assignment.


We had a couple come all the way from Hesperia today to look at our spa - and they're going to buy it! They will arrange to have it picked up either tomorrow or Monday.

I've boxed up a few more things for the yard sale and will take them down to the office Monday to get them out of the house.
I want to put a countdown on my blog, but am in a quandary as to how I should be counting down the days.  You see, my last day of work will be June 9, 2011.  But since I won't be 55 until July 10, I won't be officially "retired" until then.  But we'll be hitting the road right after June 9. So should I count down 'til the last day of work or the day I officially retire?  What do you think?

I say the day you retire..but that's just me..lol