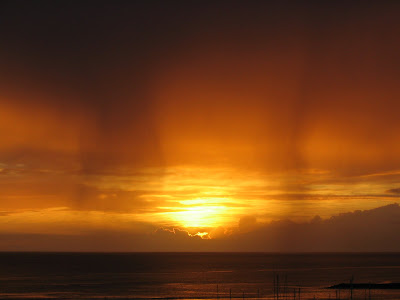 Sunset over the Pacific
Honolulu, February 2006


I'd rather wake up in the middle of nowhere than in any city on earth.
- Steve McQueen
This morning we woke up to yet another big snowfall.  Now I know that there are people who live up north or in the midwest who think it's no big deal - but this is southern California. We've been in a drought for so long that when we get an El Niño year, it's almost too much to take. During the night, we got about 8 inches.  Not a whole lot in the big scheme of things, but definitely a lot for Don to shovel.  Poor guy - just when it about finishes melting, we get more.

Sorry this picture is so small - it's from my iphone, uploaded to Facebook, then downloaded to here. If you want to see it in a larger format, it's HERE.

We were going to go camping tonight - had a site reserved at Lake Perris - but since we got this snowfall, and he can't get the truck out (no 4WD and he doesn't want to put chains on), we both decided to just hunker down and stay home.


So my goal for this weekend is to finish gathering "stuff" for the yard sale - which is next weekend.  I can't believe it's already here!  Hooray!  I have so much at the office, and so much at home - I sure hope we sell most of it - the rest I'll donate to the thrift shop.  At least I'll get a tax write-off for it.
I also have some sewing to do - I haven't touched my machine in about 3 weeks, and I'm committed to a couple of swaps in some internet groups I'm in.  It'll be nice to just sit and not think about work.


Capistrano teachers went out on strike today.  They are not asking for a raise. They agreed to some pretty huge pay cuts - but the board imposed PERMANENT cuts - 10.1% - in spite of a mediator's recommendation to the contrary.  Everyone knows this bad economy is not going to last forever. Even our district knows that any cuts we take (and we're going to be taking some big ones) are temporary.  We're getting pretty close to a settlement here - thank goodness.  But all across the country public education is taking hits - not just financial.  It's so sad to see all the misstatements and generalizations, along with the anger and fear.  I am proud to be president of a local union.  We do NOT protect bad teachers. We do NOT make too much money - I have a master's degree and years of extra training - and we DO care about kids.  We ARE evaluated based on our students' achievement - but it's a holistic approach, looking at kids, not test scores.  To reduce students to numbers on a standardized test is wrong in so many ways.  It's a damn shame what politicians have done to public education.

Teachers deserve and earn every dollar they make! Most of them could have earned much more in the private sector over the years.

Teaching is very hard. You have to balance between discipline and teaching every minute.

I taught for only 3 years, and that was part time. I admire anyone who can do it effectively and stay sane.

Sorry you don't get to go camping this weekend. Snow in So. California..I never knew.

I hope tomorrow is a better day.