Another tree cut down 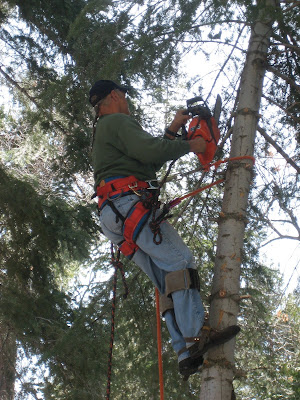 This is our friend and neighbor Gary, 20 feet up in a fir that needed to come down.  At least, Don insisted that it needed to come down.  I'm such a tree-hugger - I never think any trees need to come down.  But during the big snowstorm in January, this tree was leaning up against Tom's house next door from the weight of the snow.  Once all the snow on it melted, it stayed permanently leaning, and Don's afraid it'll collapse.  Someone told him the roots on these firs are pretty shallow, so it is entirely possible that it'll go some day. 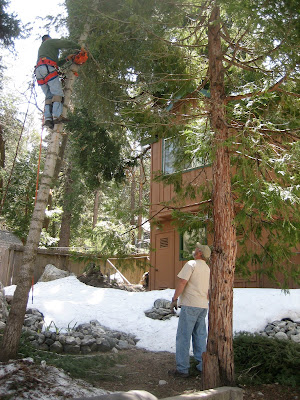 You can see the angle of the lean in this shot. 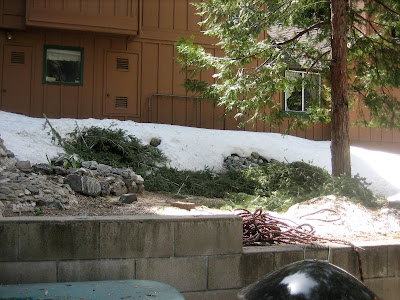 That's the stump in the sunlight in the middle of the picture; with the branches Gary had pre-cut still lying in the snow. The tree is now cut in fireplace-length logs, and stacked in the corner of the yard to season until next winter.

I had a very busy day - I emptied out the hallway bookcase, and will be meeting a gal at Starbuck's tomorrow morning to give her 3 large bags of cookbooks.  I'd contemplated trying to sell them at the yard sale, but she'd posted on freecycle that she needed cookbooks. She has 4 daughters in college, and they all want to learn how to cook - so these are all going to a good home.

I then emptied out 4 giant tubs in my "craft closet" and have a large box of items labelled and priced for the yard sale. I added more things to the trash, and spent a half hour selecting and labelling clothes in the front closet.  Since I'm only going to work 1 more year, some of the "professional" clothes just won't be needed any more - I don't see myself wearing them again anyway since my tastes have changed.

We have a man coming tomorrow to look at our spa - something we'd not even thought about until today. But I saw on the craigslist "wanteds" that he was looking for a spa - I emailed him, he called, and is coming up tomorrow.  Later on in the day I'll be dropping off some books at the high school library.

Also, there's another man coming to my office tomorrow to get the grandfather clock - I posted it on craigslist and 3 different people have inquired about it.  That'll be some good money to put in the blue pig.  Don brought up a few things from the basement, and we put some in the yard sale boxes and threw out others.  Next weekend:  the 5 boxes of Christmas decorations and lights.

Kenny called Friday night, and I told him that when he comes home on leave next month he was going to have to decide what to do with the trophies, yearbooks, and other items he'd left here.  He can mail some things to himself, and might just have to part with some other things. He said he's fine with that. He's going to be at an AFCOMAC (Air Force Combat Ammunitions Center - and yes, I know the letters don't match) course at Beale AFB beginning in 3 weeks.  ("I'll be building a lot of bombs...")Then he'll come here for a week before he returns to Japan. When we come back from our summer trip in August, he should know his next assignment.  He's volunteered to go to Europe, but says he'll be all right with a stateside base, too.

We're supposed to be getting a small winter storm tonight - just when I get ready to wear short pants and sandals to work again. I'm really tired of winter.  Maybe this will be our last one up here!

My goodness tou have been busy. I did all that 6 months ago..I now I wished I had labeled the boxes better. I have had to open some ..digging for stuff. lol
Just think real hard before it sells or is packed up!
The tree looked like it did need to come down..sad...
Did you feel the earthquake today?

You had a good "stuff" day! I guess I should start looking at the Craig's list Wanted. I have never used it.