The Recliner Story (it was just meant to be) 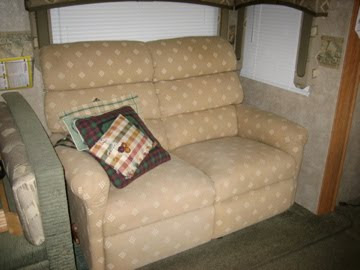 About 3 weekends ago, Don and I went to Colton to look at 5th wheels.  The more time we spent walking through various models, the more we realized that a) the ones we liked were the ones we couldn't afford, and b) the ones we could afford were nowhere as nice as the trailer we currently own.

I told Don there were two things about the trailer (a 28' Keystone Sprinter) I didn't like. One was the lack of storage, and the other was the horridly uncomfortable sofa sleeper. He looked at me like I was crazy, and said, "Go make your lists.  You have lots of storage."  (He knows I'm a list-maker.)  I went home and plotted out each storage cabinet, compartment, and drawer, and then placed everything I knew I'd want with me into those various places.  When I was finished, I still had lots of empty space left for those things I've probably forgotten that I'll need one day.  First problem solved.

As for the second problem, the story is fun to tell.  One of the things we  have always liked best about coming home to our cabin is plopping our butts back in our old recliners.  It's this "Ahhhhhh" sensation that tells us we're "home." (It also emphasizes how much we hate that sofa sleeper!)  I decided that if I was going to live in this trailer,  Don and I each needed a recliner.  We measured the space the sofa sleeper was in:  62".  We looked at RV-specific furniture, and found only captain's chairs or gliders - neither of which we wanted.  Next, I did a search on the internet for recliners.  I think I spent 3 hours looking at every available recliner, and found NONE that were narrow enough to fit two of them side by side in the 62" space.  During that search, I came across what I first called a double recliner.  I learned in further searching that it's called a reclining loveseat.

So, searching for reclining loveseats took me to Lazy Boy - who carry nearly 50 models.  Of those 50 models, TWO are less than 62", and they each START at $1159.00.   Ouch!  I kept looking - Living Spaces, Ashley Home Furniture, and more.  The only possible affordable one was at Living Spaces, and it measured exactly 62".  Nope. Wouldn't work - you need room to put your arm down on the side to move the lever.

I next went to Craigslist.  We're in the Inland Empire of southern California - a pretty big area.  I entered the search term "reclining loveseat," and up popped about 15 entries.  One of the entries was right in Yucaipa (the town where I work).  The photograph showed it to be gray with large white polka dots, but I thought if it fit, we'd deal with the color. I emailed the owner, and asked him if it was still available, and if so, could he measure it for me.  He emailed right back (must be on line all the time like I am) and said it was 56".  Perfect!  I asked him to call me, and about 15 minutes later the phone rang.   It was his wife, Linda L, who was an instructional aide in the classroom next to mine while I was teaching at Yucaipa Junior High.  She told me where she lived, and Don and I went over there the next day.  We needed to make sure it felt good, and was large enough for Don's long legs.  We both sat down, had the "Ahhhhhh" sensation, and pulled the (separate) footrests out. The footrest hits me on my ankles/heels, and the backs of Don's calves. He said that's fine.

Now, get this:  it's not gray with white polka dots. It's beige, and what looked like dots in the original picture are really diamonds made out of smaller dots. When you lean back, the chair moves forward (instead of the back moving backwards) so it's possible to recline without destroying the mini-blinds or wall. There's plenty of space on each side to reach down and move the levers. The recliner is a Lazy Boy, one of those $1159 models, only 3 years old, and recently reupholstered.  Here's the best part - the price:

$85
We took it home so Kenny could have a place to sit while he was here, and Thursday he and Don took it to the trailer, removed the old sofa sleeper, and put the recliner in the trailer.  Doesn't it look wonderful?  The way everything played out - from the idea, to the location, to my knowing the seller, to it fitting in our trailer, to the price - just shows me that it was meant to be.
Posted by Cyndi at 1:19 PM

Perfect! The one item I wouldn't give up is our dual recliner loveseat...and it came from Stu's old RV that he sold...they didn't want it. I love being able to recline at the end of the day...the only way to go. Love the story and the price, definitely meant to be!

I guess this proves it pays to shop around. You got yourselves quite the bargain and it really looks brand new! Great work.

I just love those special finds!!! Now I need to look for one!! lol

Can't get my wife to give up the sleeper sofa. Something about, "where will the grandkids sleep".