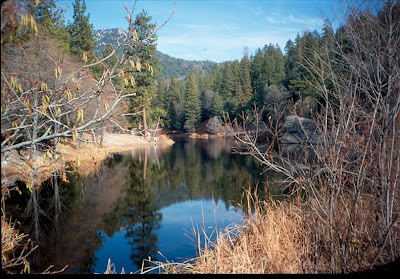 Green Valley Lake in the San Bernardino Mountains
(we live in these mountains)
August 1991
Welcome to Gin and Syl,  my newest followers!  It's so exciting to learn about fellow bloggers who not only share the interests we have, but care enough to read what I have to say about everything. Gin and Syl are also getting ready to retire - I think I'm a few months ahead of them - and since they live only 21 miles from my sister-in-law, whom we'll be visiting summer 2011, I hope we can meet in person!

Yesterday our teachers' association had its annual retirement and recognition event. We've been having it (the last few years) at Mill Creek Cattle Company in Mentone, in the huge back banquet hall. We had about 150 people - a good crowd considering we only had 4 retirees this year. Since I was the emcee, I didn't get time to eat any of the non-sweet finger foods. I ate too much cake. And pie.
Tonight Kenny and Theresa are in Los Angeles at the LA Galaxy game. Don and I are watching it on TV, and he's watching the game intently, looking for them in the crowd. We know they're in the end zone, about 3 rows up - but he seems to think he knows which end zone, and which section, and is constantly pointing and shouting every time the camera shows the end zone. Too funny.  It's a sellout crowd, and he thinks he's going to see his kids.  What would really be funny would be if the camera did a close up and they were in it.
Don and I went to Costco this morning-got there just as they opened, and were in and out in an hour. I had an extensive list, but an hour! I think that's a record. Of course, since it wasn't lunchtime yet, they didn't have any sample carts set up, so Don complained about that - but then shut up when I reminded him how crowded it gets around lunch time. My tequila supply is replenished, so I can now continue making those wonderful margaritas in my bullet blender.  Does anyone have one of those? The common brand is the Magic Rocket or something like that - mine's a different brand but has the same little glasses you blend everything in. It makes better margaritas than a regular blender, and since it's small, it'll go with me in the trailer.  So wonderful - frozen margaritas whenever I want them! Jose Quervo, you are a friend of mine....
My retirement date is now June 2, 2010 - the only "up" side to our taking 6 furlough days next year. I'll have to change my side widget - something I think I said I'd do last week - but forgot. If I don't look at the widget every day, it seems like the time passes more quickly.  We have two weeks before we go to June Lake for 5 days. Then 2 more weeks after that school will be out and we'll be on our way to Colorado for the summer!
If any one is going to be in Lake City, Taylor Park, Ridgway, or Priest Gulch (near Dolores), let me know and we'll see about meeting!
Another Day Closer...
Posted by Cyndi at 8:07 PM