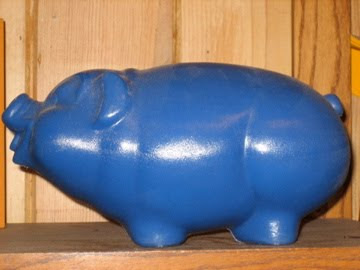 Let me tell you about the blue pig. It's about 6" high and 12" long from snout to tail. It's made of nearly indestructable plastic, and the only opening is a slot in the top. There's no plug like there is in a ceramic pig. I deliberately got this one because of that. I can't break into it.

I clean out my wallet every few days, and all the silver coins go in the blue pig. It's quite heavy now, and I'm guessing it's about 3/4 full. My best estimate as to how much money is in there is that it's over $500.

Now that I"m using ebay and craigslist to start Project Purge, all the money I make from those sales will go in the blue pig.

I haven't decided what the money in the blue pig will be spent on - and I won't decide until it's crammed so full that I can't put anything else in it. One thing I HAVE decided is that it's going to be related to our full-timing goal - something for the trailer, a bill that needs to be paid off, gasoline for the travels - who knows? We'll see what the need is when the time comes.
Posted by Cyndi at 8:30 PM