More yellows, and a harrowing experience

Each day brings more yellow. There are even some reds mixed in. 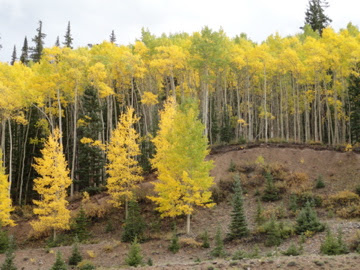 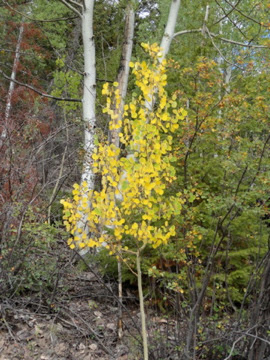 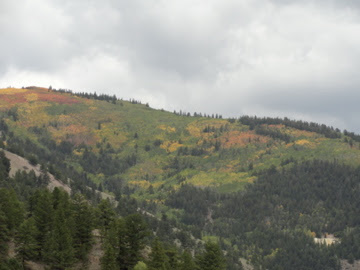 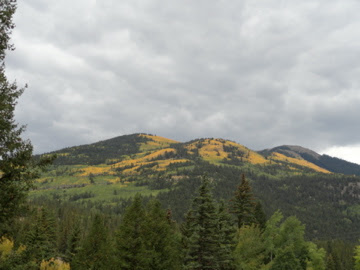 Today the weather forecast was for a 30% chance of thundershowers, so we risked a trip up Cebolla Creek. First you have to drive the 20 miles downriver from Lake City, go over the divide between the Lake Fork and the Cebolla Creek drainages, and then pick up the unpaved road that goes up Cebolla Creek.  For the first 15 miles or so, you're on mostly private land, as the creek meanders down a very gentle grade.  Then after you hit Forest Service land, the road starts going uphill through the Cebolla Creek canyon. We stopped around 11 am at Cebolla Picnic Area, where Don fished for about  an hour and a half.  A few small showers passed through, but around 12:30, it started to rain pretty hard. He came back to the truck, threw his gear in the back and didn't even take time to get out of his waders. "Let's get out of here!"

We headed up the canyon - we should have gone back down - and after we passed Spruce Dispersed Area the road began to get steeper.  Don was trying to make good time, but when we turned a corner we hit some ruts and the truck fishtailed. It's not a 4-wheel drive, and with the back rear end, we fishtailed right into a ditch on the right side of the road. I saw that the ditch was full of rocks, so knowing we had the rocks for traction, I told Don to start backing down. I knew it would get shallower until he could get out of it.  After about 30 yards, the truck made it out of the ditch, but we were almost sideways on the road, with the rear wheel on the left side nearly on the edge (with a 200-foot dropoff). Don gently shifted to low gear and we inched our way through the mud until we were straight, and had enough traction to start going uphill again.

For the next 4 miles we drove through sloppy, muddy, slippery conditions, and only began to breathe easier when we hit gravel. I remember saying several times, "Don't stop!" because I was afraid of getting bogged down.

After about 7 miles we made it to the top of the road - a good 4,000' higher than where we'd started. Pavement.

We headed down Slumgullion Pass back into Lake City, where it's been raining off and on all evening.

Tomorrow Don will go back to fishing where he gets to stay on paved roads!
Posted by Cyndi at 7:52 PM

Yikes, that sounds harrowing. Glad you made it out okay.

Harrowing is right. Would have scared me to death!

That was definitely not a fun experience, glad it turned out okay.