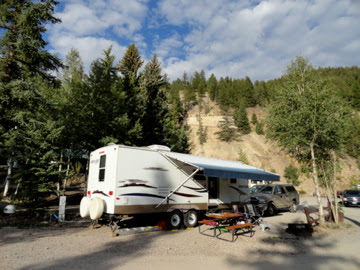 This is our site, number 17, at the Highlander RV Campground in Lake City, Colorado. We're about a half mile from Lake San Cristobal, and about 50 yards from the Lake Fork of the Gunnison. We've been here about a week now - got here last Friday. We've been coming to Lake City every other summer since 1990 - and have been in this campground since 1997.  It's run by Don and Dianne Campbell; Don is a retired USAF fighter pilot.  They're wonderful people who welcome us back with open arms every time we come.

The days have been fabulous. Each morning it's clear and sunny - and a bit chilly. Don and I get up around 6:45 or so, and dress in sweats and boots while we drink our coffee outside. Then the sun comes up over the mountains in front of us, and by 9:00 we're in our shorts and sandals. By noon the clouds have built up, and most afternoons have some thundershowers or light rain. By night time it's clear again. Last night was lovely with the full moon. 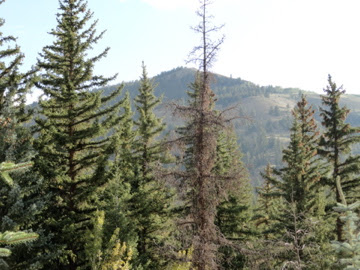 As I have said many times, it's all about the view. This is the view from our "front porch."

When we finished setting up last Friday we took a short drive around the lake. In the upper section, where the river flows into a marshy area, we saw this gal. 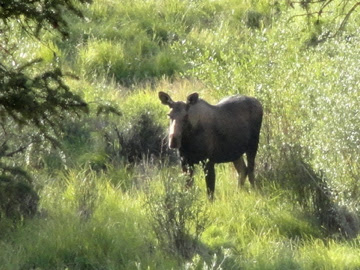 She was calmly munching away, and didn't run at all when we got about 50 yards away to take the picture. We've been told that there are more moose around here than ever before; there's a trio of bulls hanging around the Deer Lakes. We'll go up there next week and fish a bit and see if we can find them.

We enjoy a cookout and potluck every Monday night in the pavilion - you bring your meat to grill and a dish to share and get to know the other folks in the campground. Since there are only 26 sites, and some of them are now empty as it's late in the season, there are about 20 people at the potlucks. I made some scalloped potatoes last time; we enjoyed other side dishes such as corn and black bean salad, 15-bean soup, potato chowder, brownies, snickerdoodles, and a cherry cobbler made in a Lodge Dutch Oven by Don and Dianne's son Scott.

Every Friday morning we enjoy donuts and coffee in the pavilion, courtesy of Don and Dianne - yet another opportunity to socialize with fellow campers.

Don has been having a blast fishing - he goes in the morning right after breakfast, and comes back mid-afternoon, or when it starts to rain. He's been successful, too, especially in the fly-fishing only section above the lake. There are so many places to fish; we'll be hitting as many as we can while we're here. There's also a massive network of ATV/Jeep roads in the mountains - the famous Alpine Loop is here that goes up and over Cinnamon Pass and Engineer Pass, connecting to Silverton and Ouray. We rented one of Don's Jeeps a few years back to drive the loop; we haven't decided if we're going to do it again.

That's all for now - and in honor of Judy and Emma, 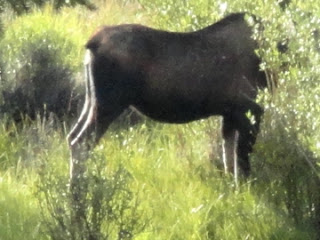