Finally on the road! Made it to the Grand Canyon

It's been a looong day.  We'd spent the night at Yucaipa Regional Park so we could get an early start, and sure enough, we were up at 4 am. and on the road 15 minutes later. We stopped for breakfast at the Denny's in Yucca Valley, and started across the desert.  When we pulled in to the Shell gas station in Needles for gas, the same guy who talked Don into four new trailer tires 2 years ago came trotting over again. This time he was unsuccessful - Don pretty much shooed him a way.   (I'd have been really upset if he'd even THOUGHT about new tires again!)

We stopped for lunch in Seligman - just parked in a large lot and put the slide out. From there we went to Ash Fork, then Williams, and then north on the 64 to Ten-X Campground just south of Tusayan. It's a large Forest Service campground, with lots of large, pull-through sites.  While there are no hookups, the cost is a FRACTION of what it costs inside the park (we paid $5 a night with our senior discount pass; inside the park it's $18 at Mather Campground and twice that for the trailer village). We were only 5 miles from the South Entrance. 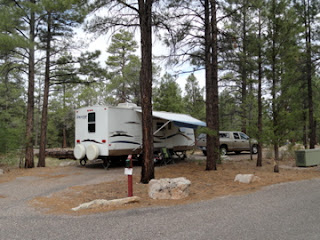 In the tall pines, nice and cool.

When we arrived, I'd discovered a tube of pizza dough had popped open, and I didn't want it to go to waste. I improvised, making pigs in blankets (hot dogs cut in thirds) and apples wrapped in dough and dripped in a sugar-cinnamon mixture).  Not one of my best dinners, but still edible.
Posted by Cyndi at 4:56 PM

So happy to see you're "On the Road Again."

I like reading your posts and it's been a while.

Glad to see you are out again. Keep the information about the Grand Canyon coming. It is one of my Must See places.

I'm hoping to get a job at the Grand Canyon next year, then I'll have lots of time to walk and hike to all of the different areas of the park.