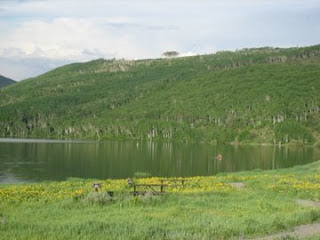 Our second stop in Colorado was Vega State Park, east of Collbran on the edge of the Grand Mesa. Our only gripe about this place was the fact that in addition to the nightly camping fee, they charged a daily entrance fee for the park - something we hadn't seen before. In California, your campground fee covers the park entrance fee. Oh well. This campground and lake sits at about 9000', and we had a fabulous view from our trailer of the lake and the high plateaus to the south, east, and west. The sites are roomy and well-spaced, with water and electric hookups (there's a dump station nearby). In the picture to the right, Don's in his float tube on the lake. 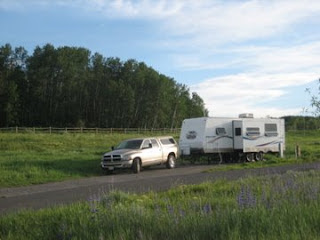 See how nice the site is? No neighbors close by. 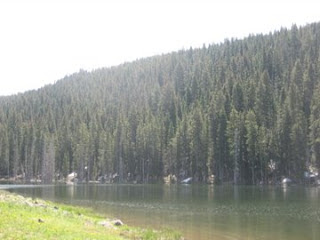 We were fairly close to the high lakes of the Grand Mesa. One trip we took was in search of grayling. The fishing guide we had said that there were grayling in Kitson Reservoir, so that was our first stop. Don gave it a valiant try, but unfortunately, we believe the lake was empty of fish from winter kill. There were plenty of bugs on the surface, and we saw absolutely zero fish coming up to feed. 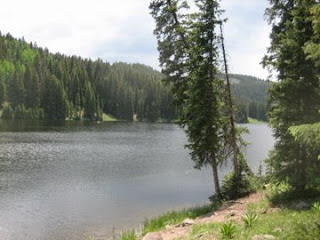 So, our next stop was Neversweat Reservoir - fancy name, yes? Don had some success at this one. Since we were at 10,000+ feet, I was able to sit out in the sun and stitch while he was on the lake, but stupid me didn't put on sunscreen, and I burned my legs and the V of my neck. Lesson learned. Sunscreen purchased and applied liberally now. 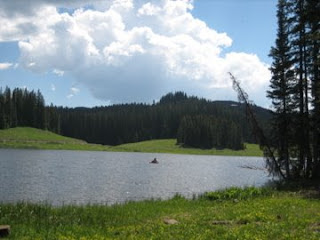 A different day trip we went to Big Creek Reservoir - a nice-looking lake with lots of people and fish. But what drove us from there after only an hour or so were the mosquitos. They were HORRIBLE. You could hear the drone of billions of mosquitos - sounded like a roaring engine. It was a very wet winter, and we got there just as the mosquitos hatched. Ick.
But if you ever want to see hundreds of beautiful lakes at over 10,000 feet, visit the Grand Mesa. The guidebook says there are 300 lakes up there, and at least 100 of them hold fish.

You are the only person I've found on the internet who has left a review about their stay in Vega State Park. My husband and I live just outside of Denver and are planning a camping trip. We are debating whether or not we should try out Vega. I love all the information you left about the area but I haven't been able to figure out if you have to drive on really rough terrain to get there. We don't have an RV or 4x4 --- just a 4 door sedan and just hope we can make it there. Do you remember what the roads are like getting there?

If you go to Vega via Collbran, it's paved all the way. Take the 70 almost to Grand Junction and then the well-marked turnoff to Grand Mesa/Collbran. At Mesa, turn left and go through Collbran all the way to Vega SP. Good paved road.

There IS a back way, shorter, from Silt, but it's definitely 4-wheel drive.

Let me know if I can answer any more questions about Vega.