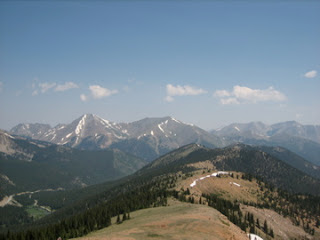 One of the "easiest" passes over the Continental Divide to drive (compared to Wolf Creek Pass, which I think is one of the most difficult), Monarch Pass tops out at 11,312 feet. We've gone over it several times, and we like to stop for a break at the gift shop/cafe. This time, I bought a necklace and some fudge (maple nut - the best!). We decided that since we weren't in a hurry, we'd ride the tram that goes to the top of a nearby mountain. It's a small, short ride but the scenery from the top is fabulous. This shot is of Mount Aetna (the tallest), and Taylor Mountain to the right. Monarch Pass is where Dad and I started our ill-fated backpacking trip along the Continental Divide back in 1977. We got about 3 miles into it, and ran into deep snow. It was too deep to continue so we gave up and hiked back to my truck. His truck was parked at Marshall Pass, so we went to fetch it and he went back home to Texas. 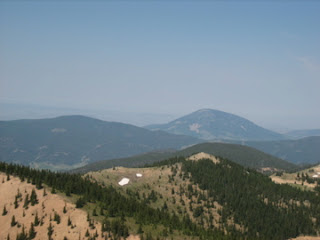 This is looking west from the top towards Gunnison. The large dome in the middle is called Tomichi Dome, formed by the pushing up of a lava intrusion millions of years ago. 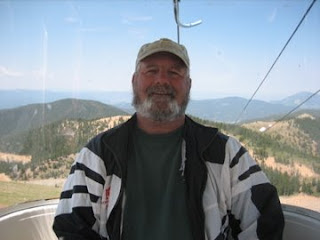 This was taken as we were coming down the tram.
Posted by Cyndi at 5:57 PM