First of all - it stopped raining and snowing; we actually had a beautiful sunny day.  Don, Kenny and I were up early, and I made our usual Christmas morning breakfast of cinnamon rolls. (I'd love to say that I used my mom's recipe, but I needed a break from all the cooking and used Pilsbury!)  We saved some for Theresa, since she wasn't due to get off work until 10:45.  Since there's no room for her to park up here, and her father knew she'd be tired, he picked her up and brought her up here for a few hours. We opened our Christmas gifts, and then ate a hearty meal:  ham, sweet potatoes, mashed potatoes and gravy, green bean casserole, cranberry sauce, and ambrosia salad. I'd made cornbread dressing, but forgot to cook it!  We'll have it tomorrow and for the next few days.

We took some pics - it had been a while since we had some: 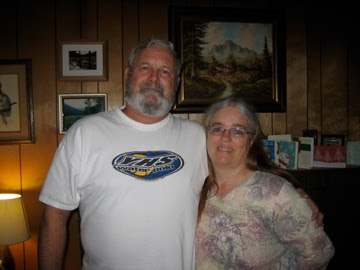 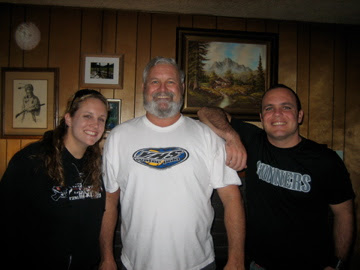 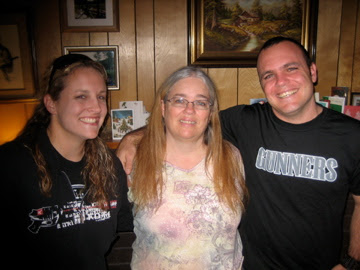 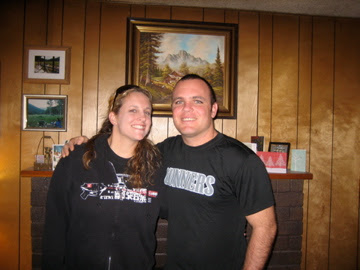 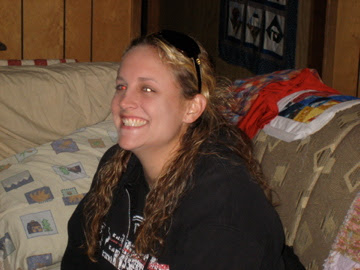 Theresa got a mini-computer, a case for it, and a gift card to Sport Chalet so she can get some soccer gear. 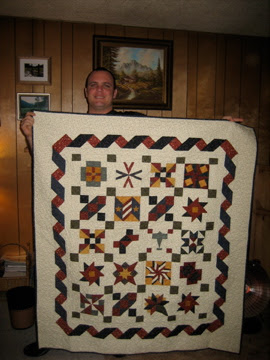 This was my gift to Kenny - it's an Eleanor Burns Victory Quilt. Since he's in the Air Force I thought a patriotic, military-themed quilt would be nice to throw on his couch. We also gave him some gift cards to use when he gets to Alamogordo and needs things for his apartment.

We're now in a food-induced stupor, our Lakers got killed by Miami, and the Cowboys are off to a bad start against the Cardinals. Theresa's back home, sleeping, since she has to go in to work at midnight.

I hope everyone had a great day! As for me, I'm enjoying some down time, planning our summer trip to Canada!
Posted by Cyndi at 5:26 PM

Nice looking kids! Say thanks for me to your son for serving. :)

I'm glad you had the kids with you, and the day sound good. As I said "over yonder," beautiful family!

Looks like you had a wonderful time I love that quilt!!! Very nice to see the family in photos.