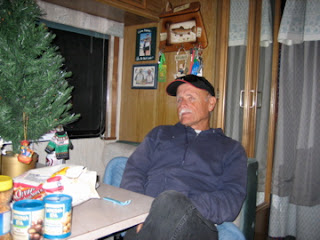 We met Gary last year - a true fisherman. He's retired, lives in Las Vegas; parked his motorhome for the winter up at Overton Beach so he could fish any time he wanted. This year we spent a lot of time with him, both in his motorhome watching football and basketball on his new big screen tv, and out on the lake. (Though I just went out one time; DH went out as much as he could.)

On New Year's Eve we went out on the lake in his boat - Gary, his wife Debbie, DH, and me. Gary was complaining of "discomfort" in his chest. He knew something wasn't right. He insisted on going fishing, and wouldn't go back to Las Vegas that day. We joined them for some champagne around 7:30, and he said if he still felt bad in the morning, he'd leave. He did. We saw that both cars were gone on New Year's Day.

We left Overton on Wednesday (the 3rd) to come home, and Wednesday night Gary called from the hospital! He'd had an agiogram done and they discovered a 99% blockage in one of the arteries! Debbie called Thursday night to tell us he'd had an angioplasty done, the stent was inserted, and he was resting - would go home from the hospital on Friday or Saturday.

He emailed us yesterday to let us know he's doing better and should be back out on the lake again soon! GET WELL, GARY!
Posted by Cyndi at 1:11 PM