The Gunnison-to-Aspen leg of the US Pro Cycling Challenge came through Taylor Park on Wednesday - this is a race that starts in Durango and ends a week later in Denver.  The route on Wednesday was considered the Queen Stage - meaning it was the most grueling.  They went from Gunnison up the Taylor River to Taylor Park, around a part of the lake, then up and over 12,126' Cottonwood Pass.  Then from there they went down to Buena Vista, up the highway a bit, then up and over 12,095' Independence Pass and down to Aspen. 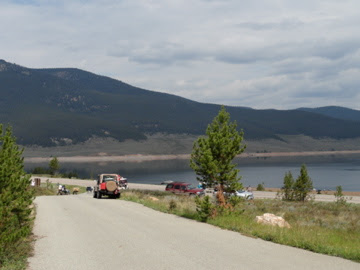 Don went fishing, so I walked down to the road at the base of the campground to join about 20 others to watch the race.  The camp hosts were there, and learned via radio from the camp hosts down at Lottis Creek (in Taylor River Canyon) that the race had just passed by.  That let us know that it would be about 10 minutes before they got to where we were. 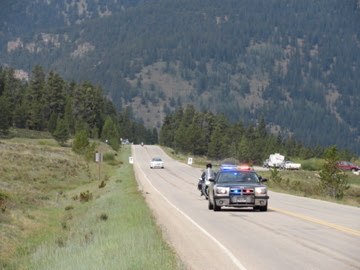 We saw the helicopter first - the one from NBC Sports that was filming the race.  Next came the Colorado State Patrol escorts.  They had sedans, motorcycles, and SUVs. 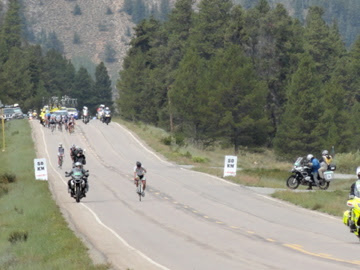 Here comes the leader, followed by a pair, and then the lead pack of 15 more.  A race official had driven by moments earlier, letting us know that the lead pack had a 4 1/2 minute lead on the peleton. 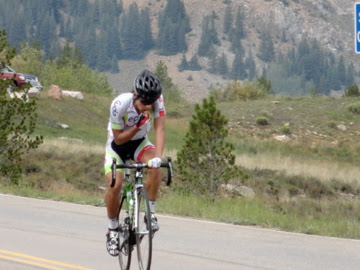 Here the leader grabs a snack since he's going downhill. 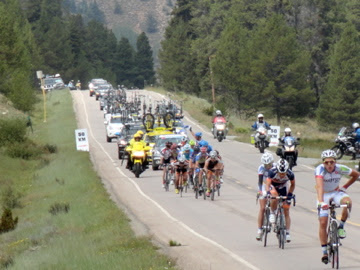 This is still the lead pack. 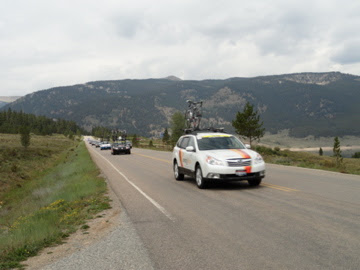 The lead pack was followed by a great number of support vehicles (with extra bikes, wheels, mechanics, etc.). 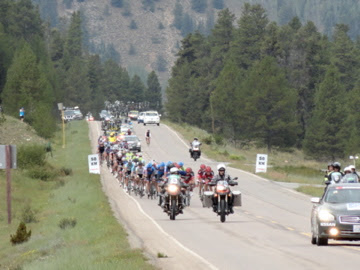 About 5 minutes back was the peleton, escorted by more police and race officials, and followed by more support vehicles.  Bringing up the rear were 4 medical vehicles, in case they were needed. 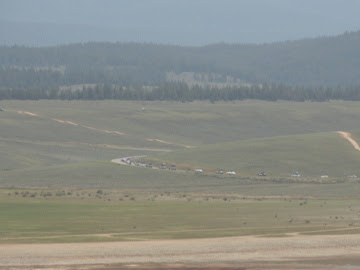 This is looking across the lake towards the peleton and support vehicles as they were approaching the turnoff to Cottonwood Pass.  Here they hit a gravel/dirt road, which they took for 14 miles to the top of the pass.  From there it was pavement the rest of the way to Aspen.
Tom Danielson won this stage, but he didn't win it by enough time to take the yellow jersey away from Christian Vande Velde.  As I'm typing this on Sunday, Levi Leipheimer, the defending champion, is now wearing the yellow jersey, signifying the overall leader.  All he has to do today is hold off Vande Velde in Stage 7 - but it's a toss-up.
I'm typng

Thats cool---- what a grueling race over those summits!!