Catching Up: We're in Colorado Now

Thursday: Finally, the long-awaited journey began. Our drive across the desert (through Yucca Valley and Amboy) was uneventful – and then we arrived in Needles. As we pulled into the gas station, a mechanics pointed out to Don that one of our trailer tires was wobbly. He explained to Don that the tread was separating, so Don told me we were going to have to replace the tire – and he meant use the spare. I went to the air conditioned waiting room, did a few crossword puzzles on my iphone, and then Don came it with the news:  “We’re going to have to replace all 4 trailer tires.” I asked why, and he stated that they were all bad. Now call me skeptical – I am, and I HATE spending money unnecessarily, but who am I to argue with the all-knowing menfolk? They all (5 of them, counting Don) were in agreement that the original trailer tires were shot, that we were lucky to have avoided disaster in the first 2 years we owned the trailer, yada, yada, yada, they were cheap nylon tires, we needed radials, yada, yada, yada.

$973 later we hit the road, Don with peace of mind, me with the belief I’d scrimped and saved for this trip only to blow a thousand dollars on the first day. Now, don’t post a comment telling me I’m wrong, or how important it is to have good tires, and so on. I can be a reasonable person. It’s just that I really, really, scrimped and saved – and it just hurts. I told Don I hoped that there wasn’t a group of men high-fiving each other as we drove off, saying,”Ha ha, we got those suckers!”

We continued eastward on the 40 and the wind picked up – yet another thing for Don to be upset about. He hates driving in wind, and does his best to load the trailer with the weight in front of the axles. However, our trailer has the refrigerator and pantry cabinets behind the axles, and I filled them up. In his agitation about the wind, he tried to tell me that I’m not supposed to put anything in the refrigerator or pantry while the trailer is on the road – that I’m supposed to go shopping when we get to our destination to get everything we need. Really? I told him he was full of it and no way was that ever going to be a consideration. I chocked it up to his anxiousness about the wind, and later he agreed he was just trying to make a point about loading the trailer correctly. (Now, why do they even make models with kitchens in the rear or in the middle, if you can’t USE the darn things?)

We drove on, and fought the wind all the way to Camp Navajo. Camp Navajo is a National Guard post in Bellemont, Arizona, between Williams and Flagstaff. They have a very nice little campground there for military folks – it has 14 sites, water and electric (there’s a dump station), and the nicest bath house I’ve seen in a while. It sits at the edge of the woods – where about 5 of the sites are in the trees and the rest in the sun. We took site #1, and backed into it easily. It was so level, we didn’t have to do a thing – and were able to keep it hooked up for the night. It was fairly warm when we got there, but cooled down nicely in the evening.  Dinner was our traditional first-night-out chili dogs and fries – and we settled down to watch a little TV before we went to bed early. 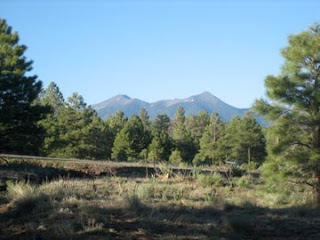 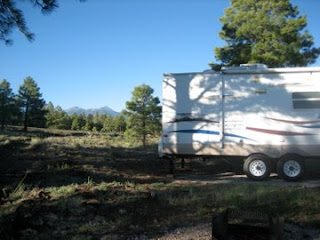 The San Francisco Peaks - the highest in Arizona - Mt. Humphries and Mt. Agassiz 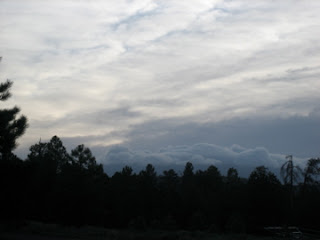 Friday: We awoke to a lovely morning – overcast and cool but not cold, with the mountains to the east making their own cloud cover.

After a quick breakfast at the McDonald’s across the interstate, we hit the road for Colorado. It stayed overcast all day, and the winds didn’t really start until after we left Kayenta. Even then, they weren’t as bad as the first day, and we made it to Four Corners around 11 am. The last time we were at Four Corners you could drive in and park right next to the marker – but now it’s all fenced off and under construction. They (the Navajos and the National Park Service) are building it up with concrete walkways, and until that’s finished you don’t have to pay to go in the “park.” All that’s there are the dozens of vendors – mostly jewelry, but a few with other Native American things such as sand paintings, replica tomahawks and bows/arrows, and the ubiquitous Navajo fry bread. We took a short walk past all the vendors – I was looking for a silver and turquoise watch band to go with a Timex watch I have, but the ones I could afford were too small for the watch So we went back to the trailer, ate a lunch of tuna salad, and continued on.

We reached Dolores around 1:30, and checked into the Dolores River RV Park. The site we’re in, #61, is a peculiar one – it’s a pull-through, really close to #62. Our electricity is on the “wrong” side, but easily reached. The water and sewer are in the same skinny island as the water and sewer for #62 – it took us a while to figure out whose was whose, but now it makes sense.

We unhooked and set up, and then drove back into Dolores so Don could get a fishing license and some beer. While we were at the liquor store, it began to thunder and rain – and I realized how much I miss thunderstorms living in southern California. We get thunder about once a year there. [When I lived in Lubbock, I used to LOVE going out in the back yard at night to watch the huge thunderstorms roll in from the southwest. There’s something magical about the lightning and the powerful sound it creates.] I told Don having a thunderstorm our first day in Colorado felt like coming home.

Since the skies cleared up in the late afternoon, Don decided to go give the river a try. It’s running high since it’s still late spring, and he didn’t have any luck – but he enjoyed himself nevertheless. I grabbed a John Connolly book (Every Dead Thing), and relaxed for a while with the exploits of Charlie Parker.

Dinner was pork chops, rice, salad, and a new-to-me recipe, Magical Butter Sauce. It’s a quick and simple recipe, and makes enough sauce for the chops and the rice. I thought it was going to be too sweet – but it really wasn’t. It was quite savory and went well with the chops and rice.

Melt the butter in small saucepan. Add the jam, vinegar, pepper, and salt, and cook over low heat, stirring occasionally, until jam is melted. Serve over meat and rice. Makes enough for 2-4 people.

Both of us were exhausted from the day, so we were in bed pretty early – about 9:30 Colorado time, 8:30 California time. We heard thunder most of the night, though it didn’t rain. (It must have all been further up the river in the mountains.)

Saturday: This morning we were up early – 5:30 California time – and turned on the TV to watch some World Cup games. That’s the major reason we decided to stay in parks with hookups all summer – between the World Cup and Wimbledon we want to be able to enjoy the contests. Breakfast was hearty – biscuits and gravy. All morning it continued to thunder above, and every once in a while a strong shower of rain or hail moved through. It’s a dreary day – but that’s just the skies. I’m loving it. Don doesn’t mind since he doesn’t want to fish anyway with the soccer games on. So we’re both kicking back in our recliner watching the games.
Posted by Cyndi at 5:50 PM

I feel your pain. Three years ago we flew to Idaho and bought our first RV ever... 5th wheel. Pretty much the same thing happened... after the shock of the cha ching we did have a nice evening boondocking at Les Schwab and walking around Hood River in the Columbia Gorge.

One of the things RVing does is gives you time and opportunity to develop free hobbies I like to think in the long run that helps cushion the blow.

Ouch that was a lot of garage sale money spent!! I feel your pain.

Now with that said..how much is it worth..not to have a blowout..or even a wreck!! Just a saying!! lol

But me..yes I would of been stewing..and possibly would of wanted to get a second opinion..but men usually don't do that!!

Okay I have missed something..where are you heading too?

I didn't think I had missed a post. Need more indo please!! lol

Be careful and ENJOY!!

Coming from Wisconsin I too miss the summer thunder storms. I love the power you feel from the coming storm! We also spent four years in Texas and experiences some pretty spectacular storms.

Dear me, here in boring California all we have is earthquakes! :+)