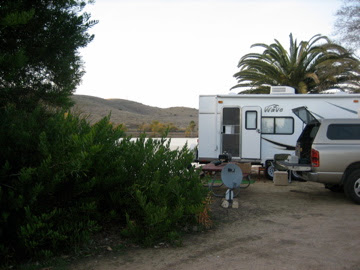 We're spending the holiday vacation in two places - first, we're at Santee Lakes Preserve, camped right on a small lake that's part of a 7-lake system in northeast San Diego. The temps are much warmer here than back home in the mountains - it was shorts weather today while we toured the Midway aircraft carrier. Don's spent lots of hours fishing (not catching - just fishing), and I've been able to relax, stitch, play on the computer, read, and not think about work. 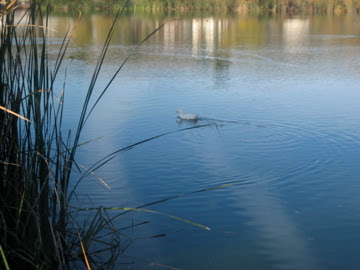 This is the view out my back window. That's one of the things I love about this trailer's floorplan - the rear kitchen and a window to see what's behind us.


Just before we left to come on this trip, I received a statement from STRS (State Teachers' Retirement System), which predicted what I'll be making when I retire. It's considerably less than what I'm making now, and Don and I had a long talk about how we can plan even better than we have. The first thing we're doing is "practicing." I've been looking at websites about cutting grocery bills, and will be trying to implement some of the strategies I've learned about. One strategy is finding the "loss leaders" at the grocery stores. I learned that the front and back pages of the grocery store ads are where the loss leaders are found, and that I shouldn't even look at the inside pages. Another strategy is to locate the "manager's specials," which can range from specials that aren't in the ad to meats just at the edge of their expiration dates. Our local Vons store always has manager's specials on meats, and I make it a point to see what's available. Thursday I found a fabulous bargain on pork. They had a package that had a pork roast, about 8 inches long, then 14 thin boneless pork chops, and 6 1 1/2" thick pork chops. The total value of the package, which was originally a large boneless pork loin, was $35.00. They had marked it down to $11.46. Wow! I'm going to get 9 meals out of it, since the roast will make two different meals. I cooked two of the thicker chops first.

This recipe is an adaptation of one I've tried in the past, and we decided that we like this version the best of all. 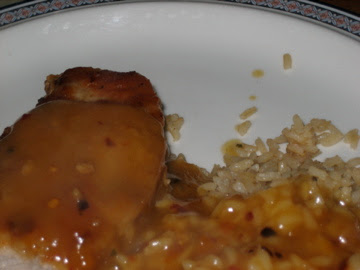 Breakfast this morning was a variation of sausage-egg casserole. I made it in muffin cups using refrigerated flaky biscuits. I think it came out pretty nicely, and they sure did taste good! 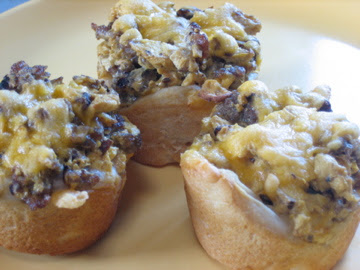 Preheat oven to 375˚. Separate layers of flaky biscuits and place them in pairs in 6 muffin tins sprayed with nonstick cooking spray. Since there are 5 biscuits and 6 tins, you'll need to "borrow" some layers from the others to make up the 6th one. When you put them in the tins, stand them on end, bottoms touching, and press to form cups. Sprinkle the bottoms of the cups with half of the cheese. In a skillet, saute onion and sausage together, breaking up sausage as it cooks. Stir in mustard. Break eggs into sausage, and continue to cook and mix until eggs are done. Divide mixture into muffin cups and top with the remaining cheese. Bake in preheated oven 17 minutes or until bread is golden and cheese is melted. Makes 6.
Posted by Cyndi at 10:32 AM