From our campsite on Henry's Lake in the corner of Idaho near Yellowstone, we could look westward up a low pass to some nice-looking mountains in the distance. After looking at the map, we could see a road going up and over that pass to some lakes and a national wildlife refuge. We packed a cooler and picnic basket, Don bought a 1-day Montana fishing license (the other one had expired several weeks ago), and we made it an all-day excursion. 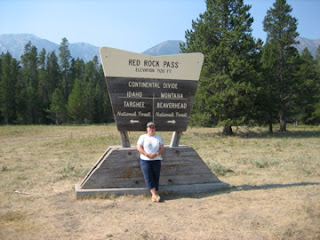 We were surprised when we reached the pass - it really didn't seem like a Continental Divide Pass. But here's the proof! 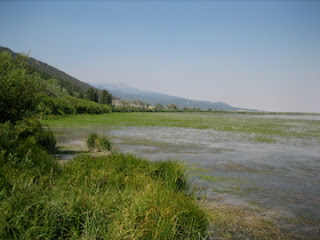 This is the southwest corner of Upper Red Rock Lake, and you can see that it's way too shallow and marshy to fish. Besides, after we found a pamphlet about the refuge, we learned that there's no fishing in the larger lakes. Using the map in the pamphlet, we drove off in search of some fishing ponds and streams that were supposed to produce trout and grayling. 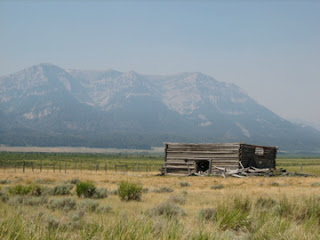 Some old buildings still exist from the first settlers who came to the valley. The mountains in the background are the Centennial Range, and the reason it's hazy is because of the the fires burning in Montana and Idaho. About an hour after the photo was taken, the smoke was so bad you couldn't see the mountains at all. 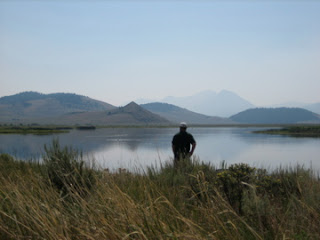 Willett Pond was the first one we came to, and Don was disappointed to learn that there were no fish coming to the surface to feed on the many bugs that were all over it. That showed him that they most likely wouldn't be interested in his flies, either. So we gave up on the ponds and headed back towards Red Rock Creek. We drove right past a "Dead End" sign, because I insisted that the map, printed in 2005, showed that the side road went all the way back to the main road. 5 miles later we came to a washed-out bridge, and had to backtrack almost 10 miles. 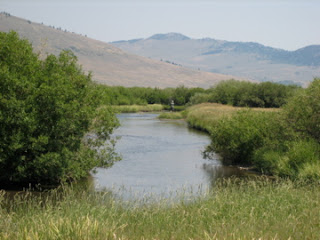 But that backtracking took us to beautiful Red Rock Creek. Another fisherman, who was leaving as we drove up, told Don that this creek has grayling in it. Don's never caught grayling, so he had to give it a try. No luck on this day. But the next day, he went back, and caught several.
Posted by Cyndi at 10:27 AM