I've heard a lot of good things about Bisbee, so that was a place we'd wanted to go. It was only about 45 miles away - a quick trip through Tombstone and then up into the Bisbee Mountains. We got there around 10, and found that the Visitor Center was inside the Queen Mine building. So we parked there to start our day.
We decided to take a quick tour of Bisbee on foot first, and then do the Queen Mine Tour later.  So we walked into town (all of about 100 yards away) and looked around at the various stores and unique buildings. 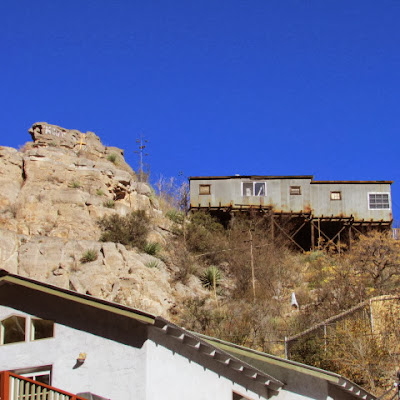 This building up on top of the hill looked like it was made of tin and was going to rust away pretty soon. 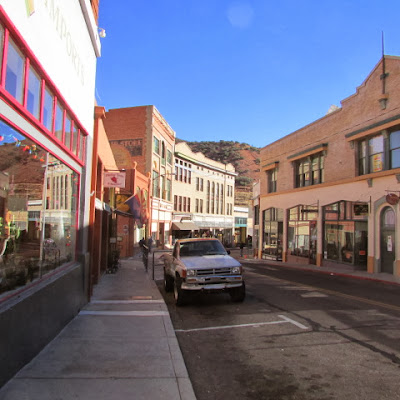 A tight squeeze for two lanes on this main street through town!  We stopped for coffee at Bisbee Coffee - relaxed there for a bit and decided that we'd take the Queen Mine Tour before we had lunch. So we walked back to the Queen Mine building, paid for our tour ($13 each), and got fitted out in hard hats, yellow slickers, belts, and lamps.  There were only 4 of us for the noon tour; we sat on little train seats that we had to straddle.  At first I was behind the other man in the group; I then moved to have a place to lean back. 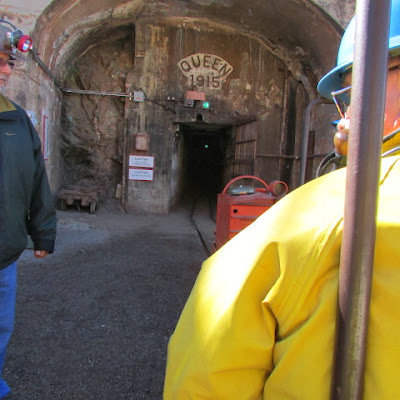 Getting ready to enter the mine. Notice the sign - 1915 was when this particular tunnel was dug. 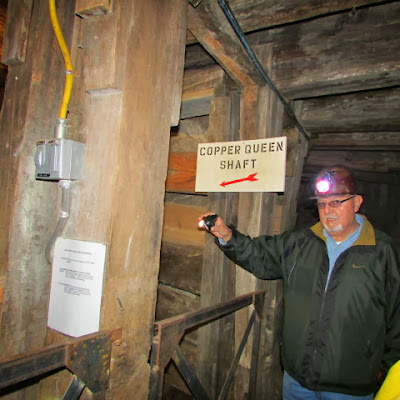 Our tour guide worked in the mine when he was in his teens, and showed us a couple of photos of him back then - early 1970s. 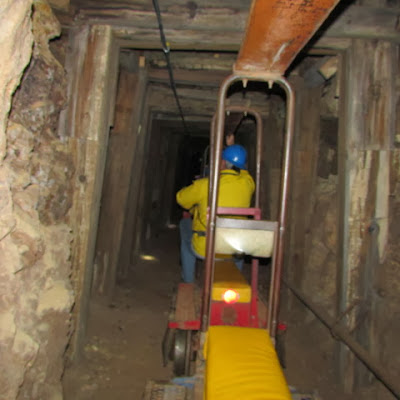 That's Don in front of me, holding on for dear life as we went further into the tunnel. 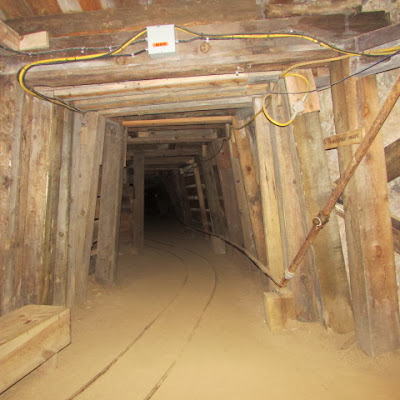 Here we got off and walked down that tunnel.  We went 1500 feet into the mountain, according to the guide. 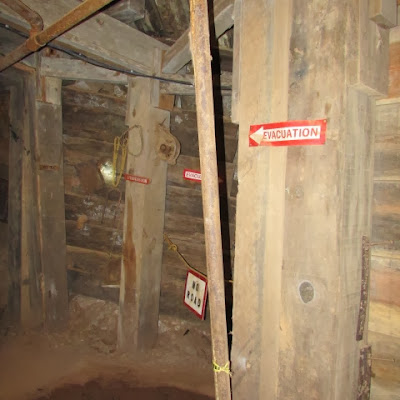 In case of emergency in the tunnel we were in, this was the evacuation tunnel. It came out somewhere else on the mountain. 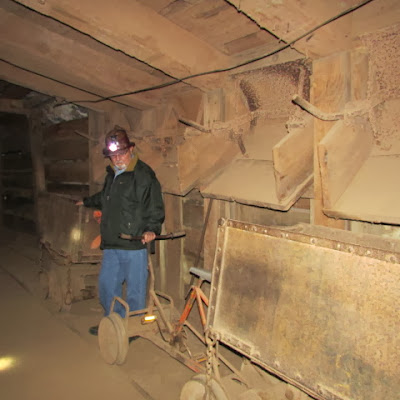 These are the ends of chutes from the levels above us, where ore would drop down into the buckets on the rails and then get carted out of the mine. 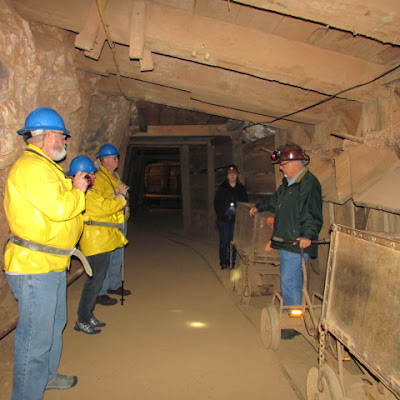 Don and the other couple on the tour listen to the guide. That's the assistant in the rear. 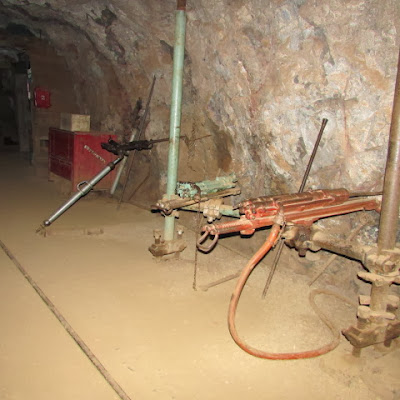 Several different kinds of drills - used for drilling holes in the rock that would be then stuffed with dynamite and blown up to keep expanding the working area. 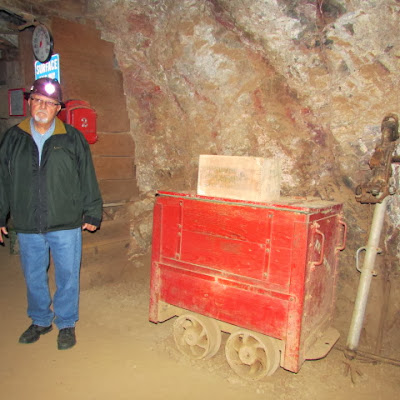 Explosives were hauled in this red cart. 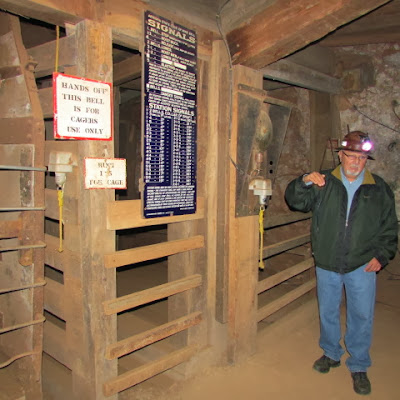 This elevator was used to carry 9 miners at a time from level to level, as well as to bring up ore from lower levels. 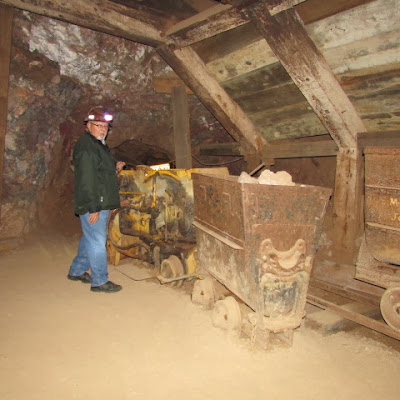 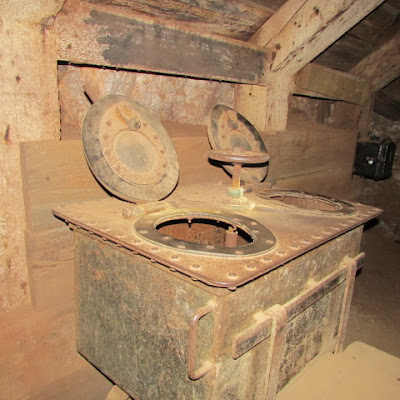 Imagine using a two seater - I mean, doing your business while someone else is also doing his right next to you!


After the tour was over, we went back to town, were I discovered Bisbee Olive Oil.  I'd seen a business like that in Creede, Colorado.  They have a large number of different flavors of olive oil and balsamic vinegars to taste, as well as some soaps and body care products. We tasted balsamic vinegars, and I bought two - one is an 18-year "regular" flavor (divine - thick, sweet, and oh so good) and the other is Chili (spicy and sweet at the same time).  Since we like them with bread and basic olive oil, we decided not to get any expensive oil.

The woman in the olive oil shop recommended The Table for lunch - and we are so glad we listened to her.  Don had the Ancho Reuben - the mustard was spicy and he said it was the best Reuben he'd ever had. He had sweet potato fries, and gobbled them up! I had the Bleu and Black - a hamburger that had bleu cheese and grilled red onions on it - nothing more. The meat was delicious, and I almost inhaled it, it was so good. I was in the mood for fruit, so I skipped the fries and had a fruit mixture. Tasty. 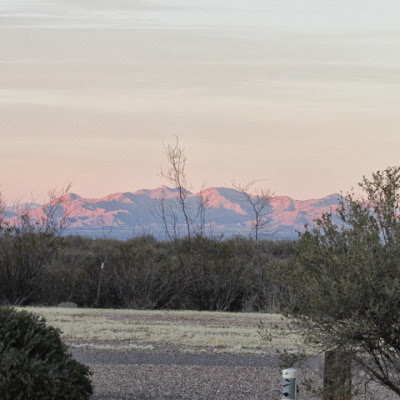 We made it back to the campground in time to see the sun casting the last light on the Dragoons off to the northeast. 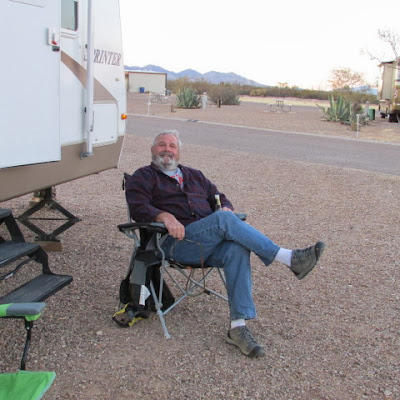 Don and I sat out for a while, enjoying the mild weather. 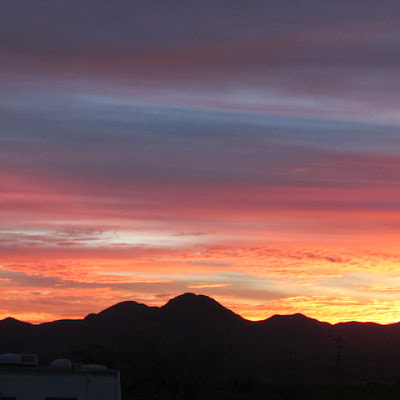 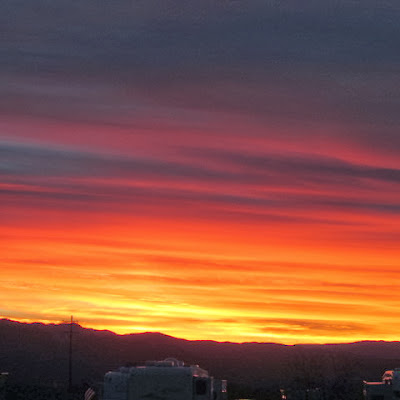 And then we enjoyed another brilliant Arizona sunset.
Posted by Cyndi at 3:56 PM

Good tour. We enjoyed the town, but thought one day was enough.

We really enjoyed Bisbee too, but passed on the mine tour. Now seeing your pics, I wish we had done it!