Agness, Oregon - on the Rogue River

When I was teaching at Yucaipa Junior High, I worked with a wonderful PE and Ed for Living teacher named Barb Holdorff. She retired about 5 years ago, and with her husband Harry, bought Agness RV Park on the Rogue River in Oregon. We planned our trip to make sure we spent a few days there. It's a beautiful park, 30+ miles up the Rogue from the coast, with huge sites, well-manicured grounds, and very clean, well-maintained facilities. We had a wonderful visit with Barb and Harry, and made friends with Hans and Sheryl in the next site. 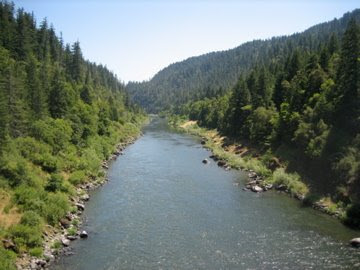 While these two pictures look almost identical, the above one is looking downstream, and the one below is looking upstream from the bridge near the park. 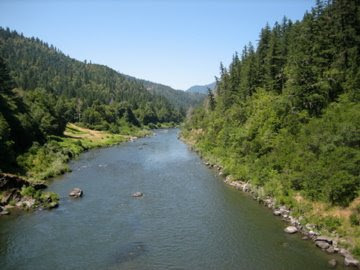 One day Hans and Don decided to kayak-fish, so Sheryl and I drove them upriver about 9 miles. 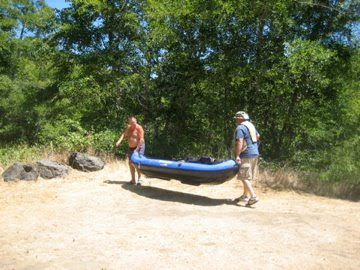 Here are Hans and Don taking one of the rubber kayaks to the launching site. They took about 3 hours to get back to the RV park, and Don described his first experience as frightening but fun. He said he almost fell out several times, but managed to stay in. He also said that while the rapids may have looked mild from above, they looked huge when he was actually in them. 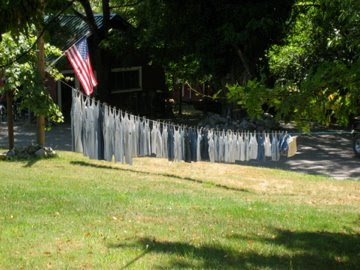 While the men were on the river, Sheryl and I went to the town of Agness - across the river from the RV park but a 6-mile drive upriver, across a bridge, and downriver again. Agness has a post office, two lodges, a grocery-gift store, and a landing strip. The photo above is of the overalls hanging on the line outside Lucas Lodge. Sheryl says they've been there a long time and are a little symbol of the lodge. 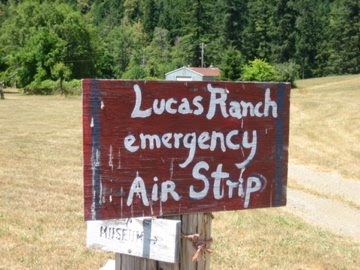 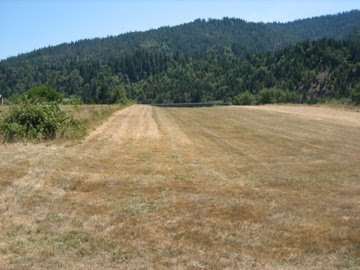 The airstrip looks like a field. Wait. It IS a field. If you look really close at the center of the picture, you can see one of the bridges across the Rogue - so planes coming in have to fly over the bridge to line up to land. There's also a road THROUGH the airstrip - I was standing in the middle of the airstrip on the road when I took the photo. There's a set of photos and newspapers in the Old Agness Store of an incident a few decades ago when an airplane collided with a car on that road.

I should have taken pictures of everyone. I forgot! But we had a great 4 days with them, including a dinner our last night where Barb cooked a turkey for the 6 of us. We've made some new friends in Hans and Sheryl, and hope to keep in touch.
Posted by Cyndi at 10:18 AM

Cyndi: Your photos and descriptions remind me of my childhood. My family camped at Rogue River and visited Crater Lake, where my parents had to buy us all sweatshirts due to unexpected cold weather with snow on the ground (in July!) They are both beautiful spots. That was decades ago and both parents are gone now..thanks for the memories! Louise